Award-winning Welsh brewers, the Otley Brewing Company, will be swapping their kegs and casks for catwalks at London Fashion Week this week (14 to 18 September).

The Otley brewers have been invited to host their own bar at vibrant designer, Eley Kishimoto’s launch party where they will showcase two of the company’s best ales. The German style, 07 Weissen and the Thai green curry flavoured Thai-Bo, will take centre stage at the show and will complement what’s set to be a memorable return to the catwalk for Eley Kishimoto.

The contemporary brewery has grown significantly since it was first established in 2005 and its unusual ales and unique branding has meant that it not only appeals to beer enthusiasts but also to a wider audience of younger, female drinkers. 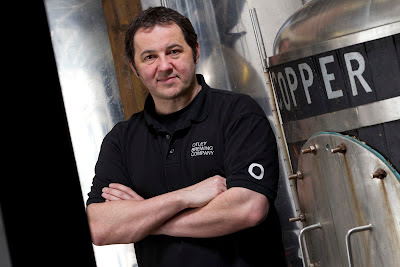 Nick Otley, pictured above, managing director of the Otley Brewing Company, said: “To be showcasing our beers at one of the world’s most iconic events is a great opportunity for us to bring some Welsh flavour to the show.

“The beer industry is changing in a big way and for us to be hosting our own bar at London Fashion Week is a real sign of how beer is appealing to a young, trendy and more female audience.

“At Otley, we’ve worked hard to establish ourselves as a unique, contemporary brand which aims to transform the traditional image of beer drinkers. We’re excited to be supporting the Eley Kishimoto show and being part of London Fashion Week.”