Brains launch V & B ale in support of Cancer Charity 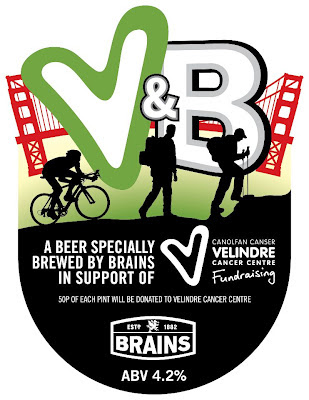 V&B is brewed with a blend of premium pale ale and crystal malts. Late-hop addition of American Simcoe and Cluster gives the beer flavours of fruit and citrus with a subtle pine freshness on the nose.

Mark Newbold, manager of the Old Inn in Penllegaer, is the man responsible for all the Velindre fundraising activity taking place across the Brain’s pub estate.

Velindre Cancer Centre has supported him through more than 20 years of treatment since his first diagnosis with testicular cancer. At the start of the year they approached him to complete a sponsored cycle across California, from Yosemite National Park to San Francisco.

But in February he collapsed suddenly while working at the Old Inn, and after being rushed to casualty doctors quickly realised that he had developed cancer for the third time. Unfortunately, due to the nature of his life saving operation, he is unable to complete the 390km bike ride. His former area manager at Brains, Martin Tranter, has agreed to take part in the challenge on Mark’s behalf - helping to reach the £10,000 fundraising target.

The campaign has been met with outstanding support from local communities around Brains pubs in the South Wales region, with everyone across the company working hard to raise as much money as they can.

V&B will be available in pubs from mid-September and fifty pence from each pint will be donated to the charity, as well as the proceeds of various challenges undertaken by Brains staff. Ian Beattie, Brand Manager at Brains said, "V&B is a great representation of the support Brains is giving Velindre Cancer Centre. Everyone in the business has embraced the initiative to raise funds and there are some fantastic activities going on across our pub estate".

As part of the efforts to raise money, a team of area managers at Brains - Steve Callow, Sally Davis, Kieran Mott and Keith Thorne – will be raising funds by completing a sponsored walk from the Greenhouse pub in Cwmbran to the Old Inn in Penllegaer – a distance of 60 miles, over two days.

Mark Robinson, Retail Area Manager has put together another fundraising team from Brains to take on an ‘Everest style’ challenge. On Wednesday 26th September at the Meridian Tower in Swansea, 11 team members will tackle the 28 storey high building where the Grape & Olive sits at the top. They will climb the stairs 88 times between them, which is equal to the height of Everest.

V&B is available at the following pubs from mid-September.