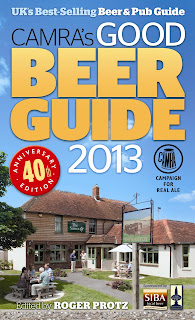 Today sees the launch of the 2013 Good Beer Guide with the real ale scene in Wales continuing to boom:

The 40th anniversary edition of the Good Beer Guide has today been launched (Thursday September 13th) with the news that the real ale scene in Wales continues to thrive.

While nationally there are now an incredible 1,009 breweries – the highest number for over 70 years - in operation across the UK*, with 158 having opened in just 12 months, in Wales, there are now 52 breweries, with 11 coming on stream over the past year. From Hafod in North Wales to Tiny Rebel in the South, Wales is becoming a brewing nation!
The Good Beer Guide 2013, jointly sponsored by Cask Marque and SIBA (Society of Independent Brewers), features the best 4,500 real ale pubs from across the UK, with details of food, opening hours, beer gardens, accommodation, transport links, disabled access and family facilities.

CAMRA’s 143,000 members fully update and revise the Guide every year, thereby guaranteeing to supply the reader with the most up to date publication to the best real ale pubs.

This year, 68 new pub entries (pubs which were not in last year’s edition) from Wales have made it into this 40th anniversary edition. In Newport the Pen & Wig on Stow Hill has made it in - by far the best pub in the City!
Ian Saunders, CAMRA Wales Regional Director, said:

'The Good Beer Guide has always been about celebrating the best community pubs serving a high standard of real ale, and in the Guide's 40th year, the competition to become one of the 4,500 pubs included has never been greater. To this day, the Guide remains completely independent and driven by the hard work of CAMRA members surveying their local pubs to ensure readers enjoy the perfect pint of real ale.'

CAMRA Regional Pub of the Year 2012
To coincide with today’s launch, the Good Beer Guide has revealed the 16 CAMRA Regional Pubs of the Year for 2012. These pubs have been hailed by CAMRA as the very best real ale pubs in the country, and will now go forward in the competition, with the overall National winner to be announced in February 2013.

Bridge End Inn
Ruabon (5 Bridge Street, Wrexham, LL14 6DA)
A summary of the Good Beer Guide description for the Bridge End Inn reads-
‘This former coaching inn near the station, owned by the McGivern Brewery with brewing on the premises, was voted CAMRA National Pub of the Year 2012. The welcoming three-roomed local has a whitewashed exterior and cosy public bar, reputed to be 300 years old, with a beamed ceiling and walls adorned with old breweriana. Children are welcome in the lounge until 7pm and there is a quiet room. Six changing guest ales include a stout and McGivern ale, plus a real cider. Groups can be catered for by arrangement. Live music features on Wednesday.’

The Good Beer Guide 2013 is released on Thursday September 13th, and is available from all good retailers, and from the CAMRA Shop (www.camra.org.uk/shop), where it is priced £10 for CAMRA members and £12.99 for non-members.