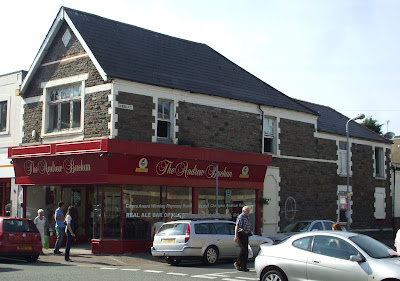 After overcoming objections from charity shops and others, Rhymney Brewery finally opened their new pub in Cardiff on Monday. The Andrew Buchan is named after the Scottish founder of the original brewery that was based in Rhymney, the new brewery have recently completed a move to the world heritage site of Blaenavon. This building has lain empty for years and has had a number of uses over the years - grocers, milliners, paint shop and video store but has now been converted into a bar for real ale drinkers. Handy for the Albany around the corner as well.
Good to see this addition to the beer diversity of Cardiff.
Media Wales have covered the opening here with a photo of me drinking at the bar, as usual. RoathCardiff.net have also covered it.
Andrew Buchan
29 Albany Road/Corner Arabella Street
Cardiff
CF24 3LH

I look forward to trying the real ales in the Andrew Buchan very soon.

It is nice to see bars selling real ale opening up, not closing down!