I entered this a few weeks ago despite having no interest in the game of football. The last time I played the game was back in University, though my only 'skill' was at running at whoever had the ball, being 17 stone and six foot fourish the other player would quickly realise that my stopping distance was about ten foot and that they were going to come off worse in any encounter so they would quickly get rid of the ball. One game finished early with the calf muscle of a fellow player being torn off so that really put me off. Still I understand that a lot of people do follow the game and the events in South Africa and the World Cup has been a welcome boost to our struggling pub industry.

I was lucky enough to draw Spain in the World Cup Beer Sweepstake, I'm still having a chuckle over Mark Dredge drawing North Korea, although trying to find their beer has proved impossible in the in UK, almost as difficult as trying to choose which breed of dog for lunch to match with their beer.
Now my knowledge of the Spanish beer scene is not great, seem to remember a couple of brew pubs; the Barcelona Brewing Company was run by a Welshman some years back and also remember La Cervesera Artesana, also in Barcelona. However their beers are only ever sold in their pub so no chance of seeing them in the UK. Did find out that in 2005 Spain has the third highest consumption of beer per head of population in Europe and the highest in Southern Europe. But how many of their beers actually make it to the UK?
So off to the supermarkets I trek. A look in Sainsbury's and Tesco's finds what looks like a Spanish beer only the small print reveals it is brewed by Carlsberg in Northampton. Not looking good so off to Cardiff I go, to check out Wally's, by far the best delicatessen in South Wales. Full range of Gwynt ciders, Penlon Cottage beers and beers from Poland, Greece and even Cyprus on sale here but no Spanish beer, though a Portuguese beer was the nearest I could find. So off to House of Fraser and in their food department I recognise Spanish writing on a beer label. Success at last I thought! Only on closer inspection the beer turned out to be Cuban! Not touching that Commie stuff until Castro dies!
Luckily a helpful member of staff asked if I was looking for anything special and pointed out a beer bottle almost hidden away on the lowest shelf. No label on the bottle but the name and ingredients are embossed in the dark green glass. 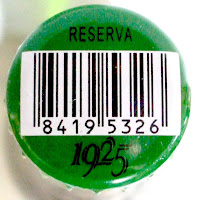 A nice design, that would benefit from sympathetic lighting to show off this unique bottle. I don't think they sell many of these as the woman on the till could not find the bar code to scan this beer – I pointed out it is printed on the crown cork!
Alhambra Brewery Reserva 1925, 6.4% ABV, £1.69 33cl bottle, House of Fraser.
The Alhambra Brewery of Granada was founded in 1925 and their beers are brewed using water drawn from the Sierra Nevada mountains.
This beer was judged the‘World’s Best Standard Premium Lager’ at the 2009 World Beer Awards.The Reserva is a deep amber colour and pours with a lively head. The aroma is predominately of biscuity malt with some unusual fruit flavours including pineapple. A smooth, sweet tasting but extremely full-bodied beer, the initial flavour coats the tongue in a golden syrupy shroud that slowly erodes away to caramel overtones and a slight astringency at the finish. Reserva is slighty cloying but this is to be expected in a continental beer of 6.4%. An interesting beer which leaves me wishing to try the other beers from this brewery.
Well there you have it, my first and only contribution to football and the World Cup.

Good effort! Looks like a fine beer. Didn't notice this stuff last time I was up in Granada. We took in a Mahou on our trip to Nigeria, and it was one of the best of the day.