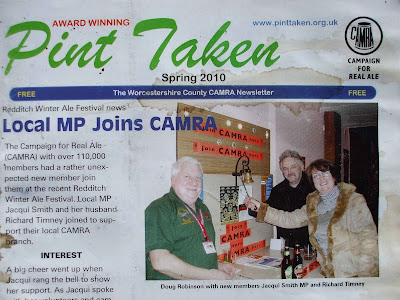 "Makes a change from tugging yourself Timney!"
A copy of Pint Taken, the newsletter of Worcestershire CAMRA, recently found its way to a local beer festival and the photo on the front almost caused me to gag on my beer. Some idiot had thought it was newsworthy to print a photo of disgraced former Home Secretary Jacqui Smith and her husband Richard 'Tugger' Timney as they signed up to join CAMRA. Now I realise that CAMRA has a wide-range of members from all political parties but you do have to ask yourself what benefit does the organisation gain from promoting an MP (as she was at the time) who fiddled her expenses and claimed everything from a bath plug to porn films on expenses? As well as her slightly dodgy second-home claims for staying at her sister's house whilst husband Tugger Timney was stuck at home with nothing more than a box of kleenex and the remote control for the television to keep him company. I almost feel sorry for Tugger Timney, having to service the kebab munching old tart he is married to, he obviously needs a bit of extra help, no doubt to be found by entering a PIN number on the television screen to access his personal choice of films.
Jackboot Smith was the worst Home Secretary in living memory, someone who was only ever promoted to her job on the basis of her sex, not on her ability to do the job. Don't take my word for, this woman who needed police protection to visit a kebab shop admitted that she was not up to do the job in a recent interview. So why would anyone think that CAMRA being associated with this disgraced former Minister is a good thing? 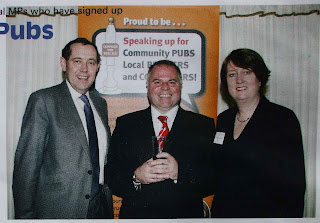 "Have you finished with those films my husband lent you?"
Jump forward to page 13 of this particular issue of Pint Taken to see CAMRA National Executive member Brett Laniosh grinning in his idiotic way as he is photographed with the expense-fiddling kebab-munching disgraced Member of Parliament (as she was at the time). Now those of us who have had dealings with Laniosh in the past realise that he is hardly the brightest spark in the National Executive but even an idiot of his magnitude should have thought twice before being photographed with this Trougher and then publishing that photograph. I did email Laniosh asking him to comment on his actions however he decided not to respond, obviously too embarrassed by his own stupidity to warrant justifying it. It does look like that by joining CAMRA at the Redditch Winter Ales Festival, it was just a cynical attempt by Smith and her monkey-spanking husband Timney to boost the popularity of herself, an attempt that failed despite the naiveté of the editor of Pint Taken.
In the General Election, the expense-fiddling former Home Secretary was resoundingly and deservedly booted out of office by the electorate. Smith's face on that Friday morning was one of the best shots of the night, the electorate had spoken and Smith realised that the tax payer will never be forking out for her bath plugs or hubby Tugger's porn films ever again. Good riddance to bad rubbish I say, Smith should have been in the dock alongside her colleagues Morley, Devine and Chaytor, the Piggies in the Dock who fleeced the taxpayer with their expenses and are now going through the legal process. A good excuse to repost some footage I filmed of those now former MPs coming out of Westminster Magistrates Court in March:

and yes that is my voice shouting "Is the taxi on expenses?", which later got quoted in the Daily Mail.

Let's face it there're enough wankers in CAMRA without celebrating another one joining.

*Disclaimer: The title of this post has nothing to do with a certain brewer from West Wales.

When me and my mates saw that mag in a pub during election time we all decided not to rejoin CAMRA. What the fuck are they thinking of surporting Dirty Dick and his ugly thieving tramp of a wife?