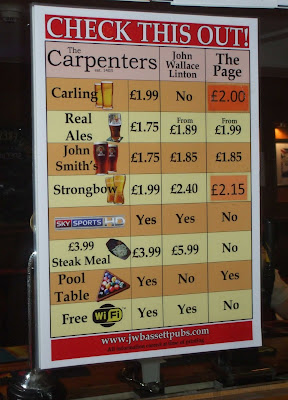 In a battle in which the consumer will be a winner, the pubs of Newport appear to be having a price war between themselves with the Carpenters, run by the JW Bassett Pub Company clearly in the lead for the cheapest pint at £1.75 for Felinfoel beer.
Cheaper than both the JD Chaverspoons pub, the John Wallace Linton and the Page, the dreadful offering from Barracuda Pub Company who seem to have a policy of employing staff who were so bad they were given the push by 'Spoons, the Carpenters has uplifted the pub scene in Newport since it reopened this year after being closed for a couple of years. Also the WiFi in the Carps' is faster and better than the Cloud offering in 'Spoons though a friend of mine did see someone watching what was described as a jiggy jiggy movie on a laptop in the 'Spoons the other day.
Elsewhere in Newport the best pub in the City, the Murenger has Sam Smiths OBB on for £1.99 a pint whilst on Stow Hill, the Pen & Wig is doing guest beers for a promotional price of £2.00 a pint, with Ruddles County and Wadworth 6X being seen on the bar recently.
So all in all it's a good time for the consumer with all this price cutting, just wondering how many pubs will be putting up their prices for the Ryder Cup when it is hosted in Newport later this year?

For those of you not familiar with Newport, here is a promotional video of the City (Cheers Mr Raybould for the link):

Price competition, the sign of a healthy and functioning market!