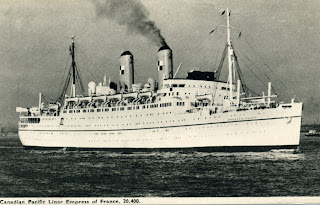 The White Hart pub in Machen, near Caerphilly will be hosting a beer festival this weekend and landlord Alan Carter has even brewed 2 special ales for the occaision. Empress Ale at 4.5% and Quarrymen at 5.5% will be two of the real ales on sale alongside others from around the United kingdom when this beer festival starts on Friday 5th Febuary.
Other ales are:
Breconshire Cribyn 4.5%
Evan Evans SBA 4.6%
Waen Festival Landmark 4.2%
Conwy Welsh Pride 4%
Nant Coryn 4.2%
Stonehouse Station Bitter 3.9%
Otley O Rosie - New Otley beer at the festival!
Monty's Equinox
Purple Moose Glaslyn
Newmans Red Castle Cream
Rhymney Scrum V
Bullmastiff Sloberchops
+ plus a few more. Most of the beers will be on the stillage in the rear room, others will be on the handpumps on the bar.

Journey planner:
Machen is easily reached from Newport or Caerphilly via the Number 50 bus


Below is some background information on the pub and the reason why there is a photograph of an ocean liner on the top of this post.

White Hart Inn, , Nant-y-Ceisiad, Machen, 441005 www.whitehartinn.org.uk
Open 11.30-2.30 (not Wednesday lunchtime), 1830-2300. Open all day Saturday and Sunday
Situated just off the to Caerphilly road and next to the old railway line, the White Hart is one of the most unusual pubs in . From the A468, follow the signs up the lane and under the railway bridge turn right into the large car park, the pub is there. An old 'Double Diamond' lantern hangs outside the pub which also features the pub name. The White Hart was built for the tramroad, now a cycle path and up to 1885 the pub was owned by the Morgans of Tredegar, a stag or hart's head appears on their coat of arms. Lord Tredegar leased the pub to the Griffiths Brothers brewery of Blaina who merged with Buchan's Brewery of Rhymney in 1929. It later became a free house.
On entering the pub there is a long wood-panelled corridor with the bar being entered at the end, through the doors on the left. The bar again features more wood panelling as well as an unusual oval painting on the ceiling. There are four brass handpumps dispensing real ales on the gleaming copper-topped bar. Real ales from around the are served, as well as more local beers from breweries such as Tomos Watkin and Otley. Beer festivals are held throughout the year, the next one starting on February 5th  and continuing over the weekend. The White Hart is also home to Carter's Brewery, named after the landlord Alan Carter and his occasional brews feature at the festivals.
To the side of the main bar is another, smaller room, known as the Captain's room, again this is wood-panelled. The White Hart was redecorated in 1961 with wooden panelling and features from the ocean liner, the Empress of France that had been scrapped at by Cashmore's in 1960. The Empress of France had been built in 1928 as the Duchess of Bedford and was owned by Canadian Pacific, plying the route between Liverpool and . These fittings give the pub an unique Art-Deco look. Opposite the bar is another room, this one used for functions as it has a separate bar. Here are more features from the Empress of France including a marble fireplace and a couple of corbels resting between the beams and walls of the room.
The White Hart offers an extensive menu with chalkboard specials, a good range of grills and seven different curries. The White Hart is a popular pub and features quiz nights on Sundays and darts nights on Mondays.