Save the Vulcan - one year on

A year ago today,outside the Welsh Assembly in Cardiff Bay, the Save the Vulcan Campaign presented their petition with over 5000 signatures on it to save the pub to Assembly Members. Around 50 people turned up to brave the cold on the steps of the Senedd and a number of AMs came out to listen and talk to the protesters.

Above: Jenny Randerson AM addressing the protesters outside the Senedd last year whilst (below) Nick Bourne AM listens to the protesters. 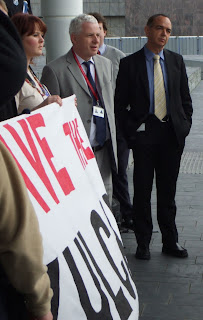 Today, the National Assembly for Wales’ Petitions Committee released the report ‘Save the Vulcan: Protection of historic buildings’
Recommendations from the committee are:
1. We recommend that the Welsh Government considers the introduction of guidance, or legislation if necessary, to allow the protection of buildings that are of importance for social and cultural reasons.
2. We recommend that the Welsh Government consults with Welsh local authorities and the WLGA with a view to strengthening the powers available to local authorities to prevent the demolition of buildings that meet the criteria for local listing.
The report is a response to a petition of 5,000 signatures calling to save the historic Vulcan Hotel from demolition.
Save the Vulcan campaigner Rachel Thomas said, “We are pleased the Assembly’s Petitions Committee took time to examine our petition. However, this is by no means the end. This is just the beginning of the Vulcan campaign, and our aim is to see the Vulcan thrive for another 157 years.
“The fate of the Vulcan now lies in the hands of the developer Derek Rapport, and we strongly urge Mr Rapport to comment immediately on the future of this Victorian watering hole.
“According to the BBC, pubs in Wales are closing at the rate of five a week. The Vulcan should not be allowed to become a statistic.

“We strongly urge the Welsh Government to act on the report’s recommendations as soon as possible”.
Save the Vulcan campaigner Graham Craig is keen to see strengthened powers for Cardiff Council to prevent the demolition of buildings that meet local listing criteria. Graham said, “The Vulcan must be protected, and listing the building is the best way to do this. We understand why the Vulcan cannot be listed under Cadw’s current criteria, but the Welsh Government and the WLGA must now move swiftly to introduce legislation to protect buildings which are socially and/or culturally important”.

Local architect Jonathan Adams said he could see no reason why the Vulcan could not be incorporated into a future redevelopment of the site, and that it would pose an exciting architectural opportunity.

Save the Vulcan campaigner David Wilton added, “Don’t forget to visit the Vulcan during the 6 Nations. The atmosphere is unrivalled, and the beer’s pretty good too!”

The Vulcan is the only building to survive from the area formally known as Newtown. 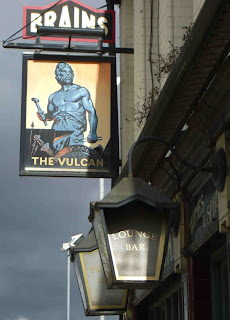 Above: Window pane from the Vulcan
BBC Also cover this story here
As does the Save the Vulcan blog
As does Media Wales
Save the Vulcan Timeline:
2005: Brains given compulsory purchase order for the Vulcan so land could be used as a car park while St David’s 2 is built.
2007: The Echo reveals it was not sold to St David’s 2, but bought by businessman Derek Rapport for £500,000.
2008: Cadw rejects attempts to list property.
February 2009: Campaigners give 5,000-name petition to the Assembly Petitions Committee.
March 2009: Cadw urged to step in after campaigners offer new evidence of historical worth.
April 2009: Drinkers were told the pub would stay open for at least another three years after being given a reprieve.
February 2010: A Welsh Assembly Government report calls for a change in legislation to give more powers to local authorities to safeguard the future of “culturally significant” buildings like The Vulcan.

Labels: Cardiff Pubs, Save the Vulcan