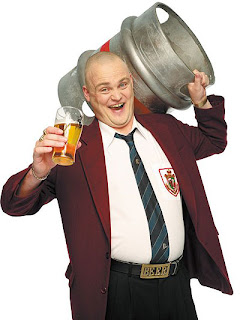 This week the Government announced from the Bunker that after years of legislation that has seen thousands of pubs being forced out of business that they have finally realised that tax revenues are dwindling and something needs to be done.And what has the Government done, well it appoints a Minister for Pubs (pictured).
After a year of dithering, Gormless Brown has appointed John Healey, Minister for Housing and Planning. Both of which are devolved matters in the UK Government, so does his brief extend to Wales, Scotland and Northern Ireland or will only pubs in England be given help? And will that help be only directed to marginal labour constituencies as has happenend with other such help?

Although given a cautious welcome by the industry, the appointment of Wentworth MP has been blasted by UKIP as too little too late,"The announcement that John Healey, the MP for Wentworth as 'Minister for Pubs' is a travesty", said UKIP MEP Godfrey Bloom.
"Given that this Government has been responsible for a whole stream of devastating legislation that has brought the pub industry to its knees it is worse than that, it is an insult", he said.
"There is no doubt that Mr Healey is, in himself, a great supporter of the pub trade but his appointment, too late in the day for the 2,500 pubs that have closed in the last year, seems more concerned with the election than it does the pub trade."
He will no doubt talk about the price differentials between supermarkets and pubs, the impact of the big Pubcos and so on, but in the next three months there is nothing concrete he can do apart from waft a hoppy smell over this government's failed policies."

Yes, it really is a bit rich to appoint a Minister for Pubs when the government have done their level best to destroy the pub trade. And of course the obvious solution to kick-start at least part of the trade will be off-limits to him.

It reminds me in a way of appointing Dennis Howell as Minister for Drought in 1976 - although then, of course, the problem went away as soon as he took office.