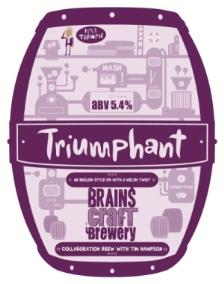 Beer writer Tim Hampson has created his ‘ultimate IPA’ in Brains'craft brewery, and the result is Triumphant IPA.


The 5.4% ABV ale is a modern take on a traditional English IPA. Combining Endeavour with Sovereign hops, Triumphant has a fresh, citrus character with tangerine and lime notes.

Tim, who lives in Oxford, was inspired by Morse’s creator Colin Dexter, who once told him that IPA was his favourite beer style. Morse’s first name was Endeavour, and Brains' Head Brewer was able to source the new Endeavour hops for Tim to include in his recipe.

Bill Dobson, Head Brewer at Brains, said: "The craft brewery has given us the opportunity to bring in guest brewers – which we have never before been able to do. It’s great to be able to draw on their knowledge and creativity to come up with a one-off beer."

Triumphant is part of an India Pale Ale series, which sees beer writers and bloggers develop and brew their ‘ultimate’ IPA. Guest brewers include Simon Martin, Martyn Cornell, Melissa Cole, Marverine Cole, and Ben McFarland and Tom Sandham. The IPAs will be independently judged at the end of the year and the winning beer will become part of Brains’ beer festival programme.

Triumphant IPA will be available in 30 Brains outlets from June 27th. For a full list of stockists here.