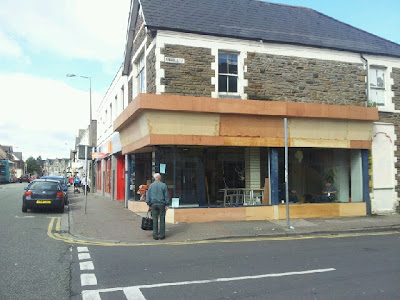 Above: The future Andrew Buchan pub on Albany Road

The award-winning Rhymney Brewery of Blaenavon have announced plans of their expansion into Cardiff with a former video shop on Albany Road being converted into the Andrew Buchan public house, named after the founder of the original brewery.﻿ The new pub will bring to the number of Rhymney pubs to 4 with the others being in Merthyr Tydfil, Aberdare and Pontypridd.
The building, on the corner with Arabella Street, has stood empty for 5 years and the previous attempts by the brewery to open the pub were thwarted by Cardiff Council who prefer to see derelict buildings than thriving community pubs.

The application for the alcohol license states that the bar’s “target audience is the over 50s, no alcopops, no pool table, just good beer and good conversation, basically recreating a good old fashioned ‘local’”.

Can't fault that a bit and I bet it the pub won't smell of fish either!
So expect to see the full range of Rhymney's award-winning beers on a bar in Cardiff sometime soon.

Just wish Rhumney would update their website more often. It doesn't even give opening times for their vistor centre.

I agree with regard to the Rhymney Brewery website - it's awful. You have to phone for any details re. visitor centre. I've emailed them some pointers today, hope they reply...:)

even though the website hasent been updated as yet ive been to and phoned the brewery and found the staff there extremly helpfull and friendly and would erge people to visit and have a good pint with tim wayne and the rest of staff top job guys and a cracking day out :)