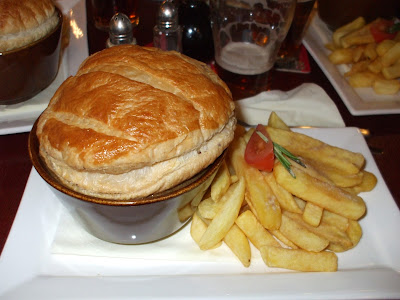 Thursday lunchtime saw myself and some Brains staff meet up with beer writer Martyn Cornell who had brewed his Colonel Williams IPA on their new Craft Brewery. The beer is named after a Colonel Williams who commanded the Welch Regiment in the 1830s, Martyn has the whole story on his blog here. What better pub to launch the new beer in than the historic Goat Major? Named after the Regimental Mascot.
This was Martyn's first chance to try his beer and the chef was asked to come up with something that matched an Indian Pale Ale, well the team at the Goat came up trumps with a curried lamb pie. Finely diced marinated pieces of lamb in a rich gravy with shallots and spinach. matched well with the 6% hoppy IPA. The curry was not too hot, although my suggesting of serving it with the traditional South Wales accompaniment of 'half 'n' half' drew a blank look from Martyn, who was not aware of the popularity of rice and chips in Welsh curry shops!
As for the beer, after the pie we tried it both with and without a sparkler, it made quite a difference without, the aftertaste lasted longer, was not sure which version I preferred so had another one to make sure just in case! A very enjoyable afternoon in one of Cardiff's best pubs that also does excellent food. 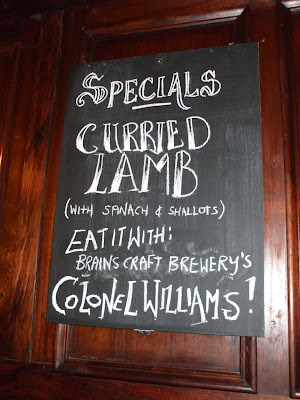 The pub does not smell of fish either!