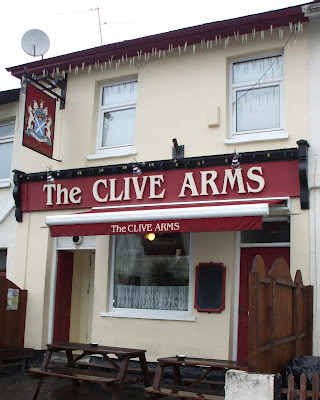 The Clive Arms is unique amongst the Victorian pubs of Cardiff as it is mid-terrace and not on a street corner as the other pubs are. The pub is situated on the Cardiff Bay side of Penarth, closer to the marina than the commercial centre of the town. The pub is named after the local landowners, the Clive family, and their coat of arms is featured on the pub sign. The Clive was owned by a pub company before two local residents bought the pub three years ago. Dating back to at least 1866, the Clive is the oldest pub in Penarth.

The pub is slightly set back from the road, which makes for a small outside smoking area with picnic tables and an awning. The doorway leads to the long cavernous interior of the pub with the dark wooden bar on the right-hand side. Red-leather seating dominates the pub with high stools around the bar. The bar area leads to a back room with more seating a pool room at the end. Downstairs is a skittle alley, notorious for being the smallest alley in the local league.

There are bricked up former windows on the left-hand side of the pub that reveal that this street was built at two different times and was not always a terrace.

The walls are decorated with an odd but interesting collection of items collected over the years from photographs of the docks and marina to old motorcycles and even a tarantula and a scorpion.

There is only one handpump on the bar and the real ale on the moment is Kite Thunderbird, from a Welsh brewery that started brewing just over a year ago. Other beers may replace this one in future. Budweiser Budvar is also available in bottles as are Vale of Glamorgan Brewery Rorke's Draught, Ringwood Old Thumper and Green King Old Speckled Hen.

Large screen televisions feature in the bar and are used for major sporting events with the friendly banter between the owners who are English and Welsh and between the pub manager who is Scottish. The Clive is very much a friendly back-street local where conversation dominates, although there is a jukebox with a good selection of heavy rock songs on it. The only food the pub does is rolls.

The Clive features a quiz night every Tuesday and the pub also offers free WiFi.

NB. Its great to see a little pub like this flurishing once again, free from the hands of the pubcos, the locals have turned it into a success and installed real ale in the place in the first time in decades.