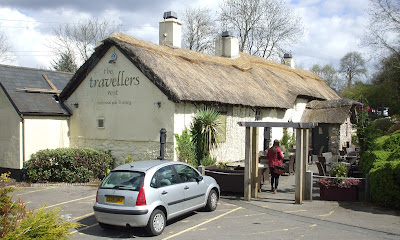 The Travellers Rest is a sturdy stone-built, limewashed pub that features, unusually for this area a thatched roof. The pub stands on the mountainside overlooking Cardiff with a very useful bus stop outside the 'A' and 'B' buses from Cardiff to Caerphilly stop outside, alternatively there is a large car park in the extensive grounds surrounding this pub. The original building has been sympathetically added to over the years but the oldest parts are easily recognisable by their low ceilings and large fireplaces. There has been a pub since 1864 when the Travellers Rest was first licensed, although the building with its rough-hewn stone walls and thatched roof appears to date to a century or so before that date. 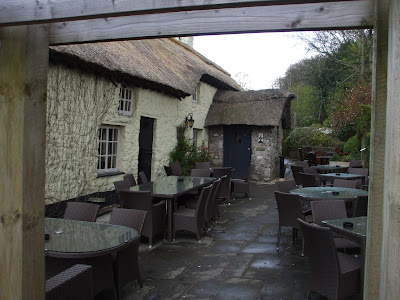 The entrance to the pub is via a modern thatched porch which blends in well with the older building it adjoins. This leads to a somewhat dark and low-ceilinged interior with a large stone fireplace to the left and the bar straight ahead. The original building has been extended at the rear and to the side, this creates separate and distinct areas of the pub that help to give it character. Alternatively there is plenty of seating in the outside areas surrounding the pub amidst the well-manicured foliage. Wooden beams partition off some areas of the pub and old ceiling beams are visible in the older parts of the pub. The internal layout makes it clear that these rooms were once separate houses, the thick, interior stone walls are left exposed on the interior and feature niches that were once used for candles back in the days before electricity. The Travellers Rest features old prints and old photographs throughout, giving a very traditional look and feel to the place. 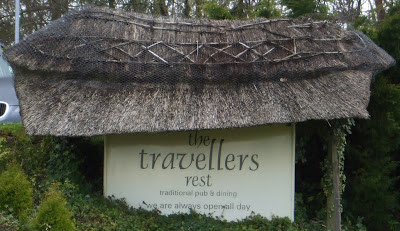 The bar features three gleaming brass handpumps with Brains Bitter and St Austell Tribute being the regular beers and the third pump reserved for guests such as the Suffolk-based Adnams Brewery and their Sole Star, an unusual full flavoured hoppy ale of only 2.7% ABV. Czech Budvar is also available in bottles as well as Aspall Cider and Brains Black is also on tap. There is also an extensive wine list and a good selection of single malt whiskies. Although not a free house, the Travellers Rest has a regular guest ale policy as the pub is part of the Vintage Inns division of the Mitchells and Butlers pub group.

Food is served all day from an extensive menu with a separate lunchtime and light bite menu. Wednesdays are steak nights and there are chalkboard daily specials as well. Old pewter tankards are used as holders for the cutlery on the tables, an unusual and unique feature for this historic old inn.

Traveline Cymru:
There is a bus stop outside for Cardiff-Caerphilly service