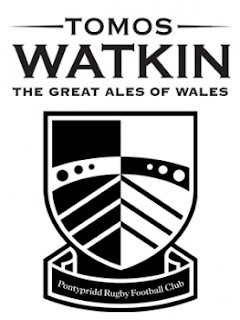 Award-winning Swansea Brewery Tomos Watkin. part of the Hurns Group, will become a major sponsor of Pontypridd RFC for the 2010-11 season.
Gareth Howells, Sponsorship & Marketing manager for Pontypridd RFC said, "Braf –o!" to Tomos Watkin on joining our black and white family. We welcome Connie Parry and the Hurns group on board for what will be an exciting season of rugby with a club that has one of the best rugby brand names in Wales and the world.
We hope that we can help put Tomos Watkin on the map, especially as we contest the British and Irish Cup cross border competition, and that in partnership we can both enjoy mutual levels of success."
Established over 100 years ago, by 2002 Hurns had grown into one of the largest independent producers and distributors of beer in South Wales.

Since then its Tomos Watkin Ales have won awards and accolades throughout the country whilst its CEO Connie Parry has recently been named ‘Welsh Businesswoman of the Year’.

Connie Parry said, "I am delighted that our Award Winning Welsh Brewery will be associated with such a popular and successful club as Pontypridd . We look forward to a long and successful partnership with the supporters, players and club and wish you every success for the new season."

With a core of six distinctive ales such as Cwrw Haf, Cwrw Braf, OSB and Dark Mild the company also brings out a number of new beers each year to celebrate special occasions or events.

This vibrant, forward-thinking company now owns a number of pubs, employs more than 100 people, sells its ‘Great Ales of Wales’ across the globe, is a significant investor in South Wales and continues to go from strength to strength.