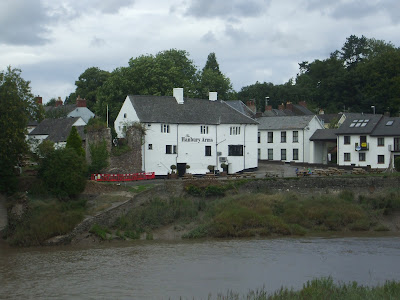 The historic Hanbury Arms in Caerleon has reopened after a refurbishment and owners SA Brain have brought this historic inn well and truly into the twenty-first century. The pub has had an extensive makeover and the interior appears more spacious than before as well as being better lit. The old, thick interior walls remain as do the large fireplaces. The separate restaurant area is still there, although with new tables. Menus on every table as well as the chalkboards advertise the extensive food range this pub has to offer. Daily specials on a chalkboard as well. The beer range is predominantly from Brains but with two guests from other breweries; the range today was Brains bitter, SA, Rev James, Marstons Long Hop and Greene King Abbot, okay it may not be a spectacular range but this is in a pub just outside of Newport so any range is a good thing.
To the side of the pub is a ruined tower, built by the Normans to defend the quay on the River Usk. Later, in the sixteenth century the Morgan family built this house alongside it and by 1720 it was in the hands of the Hanbury family of Pontypool who used it and the quay to trade iron from their Pontypool furnaces. it later became a pub with the name of the Hanbury Arms 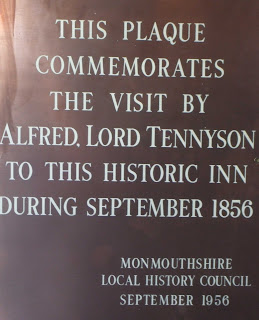 In 1856, the Poet Laureate Alfred Tennyson stayed at the inn for 6 weeks and wrote Idylls of the King here.
“The Usk murmurs by the windows and I sit like King Arthur at Caerleon", he wrote, also writing, "This is a most quiet, half- ruined village of about 1500 inhabitants”.
In those days the Hanbury brewed its own beer in a separate building, now demolished that was to one side of the pub. The medieval bridge was also next to the pub and a new bridge was opened in 1810.
By  1891 the local rowing team had their headquarters here, no doubt well-supported by the owner who was an Oxford blue rowing champion. The slipway by the side of the pub provided easy access to and from the River Usk. 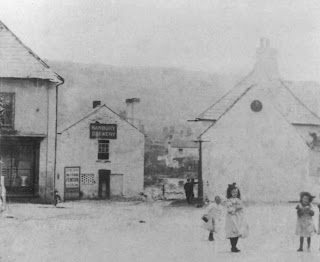 The Hanbury Arms on the right and the now demolished brewery on the left
Licensees: 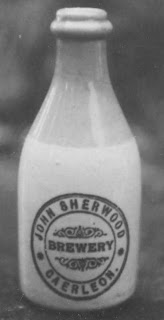 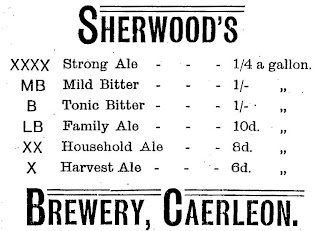 Above: Price list from 1893
1901 Josiah Brown & Son
1904 Mrs Phoebe Rowe
1907 John Sherwood
1910 Merged with Eastern Valley Brewery Co Ltd under John Sherwood
1914 Hancocks Brewery of Cardiff
Hancocks ended up in the Bass Charrington Empire and in the 1990s the Hanbury had been sold to a small pub company who were later taken over in 2001 by Brains Brewery.
In the 1950s Hancocks Brewery decided to illustrate their best pubs in prints featuring their dray horses 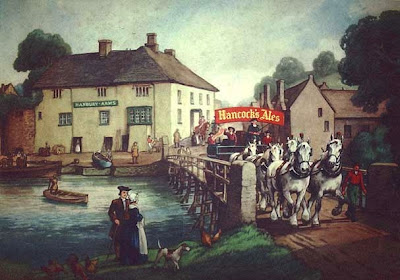 A lot of artistic license was used in the picture, mainly that the bridge by the pub had been demolished by 1820 and Hancocks had not started to brew in Wales until the 1870s! The building to the right of the pub with the two chimneys is the former brewery.
Today the Hanbury Arms has a large car park and offers good beer, food all day and extensive outside drinking areas, whether overlooking the river or in the courtyard towards the front. The Hanbury Arms is also easly reached from Newport by a regular bus service:
Hanbury Arms
Uskside,
Caerleon,
Newport,
NP18 1AA
Google Map:
View Larger Map