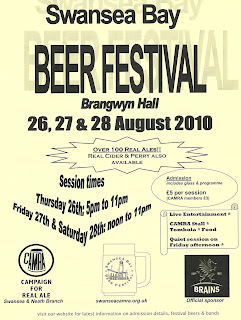 The second biggest beer festival in Wales will be opening its doors to the public this Thursday at 5pm when the Swansea Bay Beer Festival returns to the Brangwyn Hall.
Over 120 real ales, ciders and perries will  feature at this event, now an annual feature in the beer festival calender. As well as beers from local breweries such as Tomos Watkin, Neath Ales, Swansea and Brains, beers from across the UK will be featured as well as ciders and perries from Gwynt Y Ddraig, International Cider Maker of the Year and for the first time ever, ciders from the award-winning craft producer Llanblethian Orchards will make an appearance. Llanblethian Orchards cider is made from hand-picked apples and hand-pressed by three cider enthusiasts and there is no editorial bias whatsoever with regard to their products. No none at all.
The Brangwyn Hall is a fantastic venue for a festival and has a connection with Guinness which most people are unaware of. The somewhat risqué murals on the walls of the hall, painted by Frank Brangwyn, were originally meant for the House of Lords but were rejected by them. These artworks were commissioned by Lord Iveagh of the Guinness family and ended up in Swansea. So some 80 years later the decoration at this beer festival turns out to be supplied by Guinness! Joking aside, the Swansea Bay Beer Festival is a great weekend with lots of great beers and ciders, all served at cellar temperature via the extensive cooling system involved.