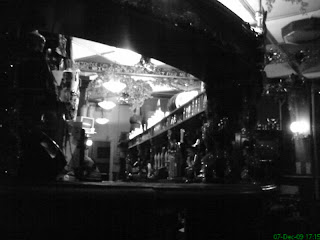 The pint and the pulpit have not always seen eye-to-eye, especially in the Valley communities in South Wales. However naming a pub, "The Capel", which is Welsh for chapel has a certain ironic twist to it. The Capel, situated just south of Bargoed at Gilfach Fargoed, is a rare local outlet for beers from Celt Experiance/Newmans Brewery, situated a bit further down the Valley in Caerphilly. Welsh cider from Gwynt YDdraig is also on here and rarest of all, perry is available on draught. Brains SA and Mayfields Ducking Stool are also on but I'm drinking local tonight. A good pub that is very easy to get to, the No 50 Newport-Caerphilly-Bargoed stops outside, or there is a train service (Rhymney line). Some old wood panelling, separate rooms and old etched glass windows give this pub some character. Sadly that is something that is missing from the chav palaces of today.

Wish I was home now, in some of the lovely pubs which we DO have in Wales.
Thanks for the entries.
Making me jealous and happy at the same time.
My local back home is 5km over the hills from teh farm, in a village of about 6 houses. Locally owned and managed, it won a CAMRA award and serves some ok beer, from the last time I was ther (ages ago, mind). Good pub, good people, good beer. Makes a good night.

Sorry. No. It's a tiny little place, the Shoemaker's Arms, Pentrebach.
No idea what's on tap now, maybe just Brains but it's a nice enough little place to have close by. Especially as the nearest town is about 10km away.
Haven't been home for years.

That Goose and cuckoo looks nice, though!

Have been to the Shoemakers, always remember the road sign saying "The road to Pentrebach is always open", despite the closenest of the artillery range!

Wow, that's a long way to go for a pint!
Yes. Even when they are firing, don't worry too much. Nothing usually lands on the roads. Just like they say in American Werewolf in London (which was filmed not too far away), "Stick to the roads, lads. Stay off the moors!"