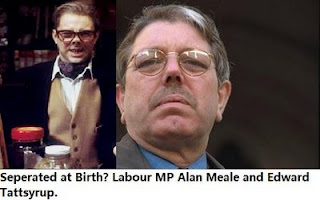 It's always a good laugh to read the Early Day Motions put down by Members of Parliament. Some EDMs give the members an opportunity to get a mention in the local paper for congratulating the local football team winning their 5th division match or stopping asteroids or tsunamis from hitting their constituencies. All joking aside, the last two were actual EDMs. However Brew Wales came across this beauty from Edward Tattysyrup impersonator Alan Meale MP.


That this House notes that duty paid on a pint of five per cent. alcohol cider is 29 pence less than is paid on a beer of equivalent strength; further notes that the UK Treasury could raise £400 million annually in additional revenue if cider duty were brought into line with beer duty; further notes that over 90 per cent. of UK cider is produced by three multinational companies; and calls on the Treasury to allow UK brewers to compete on equal terms by aligning cider and beer duty, whilst considering the introduction of some form of small producers' relief to protect and support traditional local cider makers.
Where do I start with this idiot?
Firstly the cider and beer markets are noticeably different, there is no "equal term" for them to compete on or either to aim for. The cider market is even more tied up than the beer market - you try being a medium-sized cidermaker and getting your cider into a the pubs of a pub company - the cidermaker stands no chance as the three multinationals can sell the cider cheaper, with full point of sale and marketing also available. For the small scale cidermaker the chances of getting into a pubco are even more remote. The Enterprise Inns pub, the Bell in Caerleon is a notable example though, but one pub out of their estate of thousands is unusual if not unique.
Clearly Meale fails to understand the market, being MP for Mansfield, not known as a great cider-producing area he has no first-hand knowledge of cider or cider production.

SO WHY DOES MEALE NOT JUST TAKE HIS ILL-INFORMED AND ILL-JUDGED OPINIONS WITH HIM AND STAY OUT OF CIDER? If he wants brewers to compete on equal terms then lets see them give up space on the bar for a cider served from the handpump. That's more of an equal term than aligning beer and cider duty.
The problem is that Meale cannot stay out of any business, being a member of the Labour Party, the Government which seeks to tax everyone and everything and control our lives in every way possible. The last line about "considering the introduction of some form of small producers' relief to protect and support traditional local cider makers", does not go far enough for me, as knowing this Government as soon as they decide to implement something like this, ie, a tax rise on cider everyone will be hit.
You would have thought that someone like Meale, a former environment minister, would have a love of countryside and associated agricultural activities. After all the troughing pig did spend £13,000 in 4 years on gardening, paid for by the taxpayer. Fido at the Lone Voice does, of course, have more on his expenses here. Some are printed below:
£4700 on a bathroom
£1300 on a "Garden cabinet" - That's a shed to us
£30 for 18th birthday cards
So a general trougher all round.
Early Day Motions have no chance of becoming law, they are merely a statement of opinion and as of today (16.12.09) only 14 MPs have signed EDM 389 including the self-confessed libelist and joker about farming suicides Paul Flynn MP. Nice company you keep Meale. 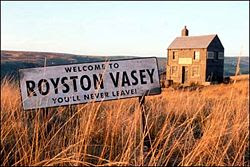 A view of Mansfield, constituency of Edward Tattysyrup MP

I wholly agree that this idea is a load of ignorant nonsense, but I suspect he is thinking more of the competitive situation in the off-trade where independent producers do have more of a presence.

There are now, of course, a "big two" in mass-market cider following the purchase of Gaymers by C&C.

If it is about the competive situation then the EDM should have stated that and called for a Monopoly and Mergers Commission report, not suggest a tax hike to sort the problem out.