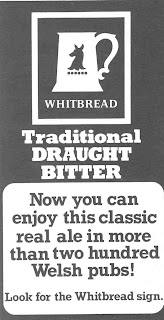 An occaisional series devoted to the worst in the world of brewing.

Came across this advert from 1980 the other day. At the time Whitbread had just closed down the Ely and Rhymney Breweries and the keg only factory at Magor (sad to say it's the Editor's nearest beer factory) had opened. Something that got me thinking was the advert stating that this beer could be enjoyed in over 200 Welsh pubs. Not a claim that many breweries could make today, with the exception of Brain's. Also looking at the 1980 Good Beer Guide there are so few Whitbread pubs in there, the majority of pubs in the South Wales section of the GBG were either Brain's or Welsh Brewers (Hancock's). Even the rare free houses sold Brain's or occasionally Crown SBB (Otley Arms of course).

At the time Whitbread Traditional Draught Bitter was brewed at the Cheltenham Brewery and the beer had an original gravity of 1038. The Good Beer Guide described the beer as “Full-bodied and hoppy”, not a description many of us would recognise as being a Whitbread beer. Perhaps because the GBG descriptions were a bit vague in those days, for instance Tim Taylor's Landlord is merely described as “a distinctive and full-bodied bitter” back in 1980.

The beer did not have a long life – it was withdrawn as a real ale within a few years.

Nowadays Whitbread has all but gone, they are merely a restaurant-owning company. The Cheltenham Brewery has gone the way of Rhymney and Ely but unfortunately the Magor factory is still there, producing traditional Welsh beers such as Stella Artois and other such dishwater.

Yes, I remember pints of Whitbread, back in the day. Albright, too. Often from the cans as well. I'd drink the cans of Albright, the Heineken, even those tiny little stubby bottles that father brought back from France, on the cheap.
Those were the days before I even knew real ale existed.
I was turned onto craft beer after I got to Japan! Strange, that. Looking forward to discovering what is new, the next time I go back to Wales. Good blog.
Thank you.