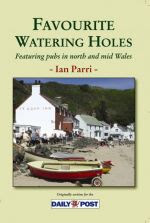 
Published around this time last year, a copy of this book has finally found its way to the Brew Wales Towers and the editor has finally found the time to read and review it. In fact it was about this time of year that the Brew Wales Editor was heading into BBC Radio Wales to drink some of Jamie and Louise's homebrew that Ian Parri was a guest on their show, plugging his book. However after drinking various beers in a live tasting on BBC Radio Wales, followed by some mulled wine, all before midday, the morning did become a bit of a blur and this book did get forgotten.
Any back to the book review, Ian Parri has been reviewing pubs in North Wales for the Daily Post, “For more years than he'll care to remember” according to the introduction. The book is a handy A5 size – ideal for packing in a bag to take to the area on a trip. All 50 pubs are listed with their full postal address and phone number as well as website if they have one. The pubs are set out alphabetically with an index at the front, unfortunately there is no map in the book which would have made it easier to visit some of these pubs. Some old favourites of mine are in here such as the Black Boy, Caernafon, and the Douglas Arms, Bethesda, an entry on the CAMRA National Inventory of historic interiors, as well as new ones such as the uniquely named Seven Eyes at Ruthin. The Seven Eyes is so named as it has seven dormer windows and was built by an architect who studied in Amsterdam. This little book is packed full of information such as this, each pub has two pages devoted to it and a photograph. The photographs could be a little bigger, but then again this book is not designed for fans of pub architecture. Ian Parri takes us on a very personal view of these pubs and though he mentions the beer range he nearly always settles on a pint of mass-produced fizzy cider, something that comes as a bit of a regret to him.
All in all a good little book on the neglected area of Welsh pubs. Not perfect, but well worth buying, now to find somewhere on a bookcase to fit it in.
Available online here.