Following on from the post yesterday entitled 'How journalism works - alcohol studies' there is another pile of seasonal rubbish from the Neo-Prohibitionists today.
Step forward the Western Mail today who have swallowed the fake charity line hook line and sinker.
Here are some real facts courtesy of the Office of National Statistics and not made up by a fake charity such as Alcohol Concern.
Shamelessly stolen from the Devil's Kitchen
The graph below shows the percentage of men and women drinking more than their 21/14 unit weekly 'limit. 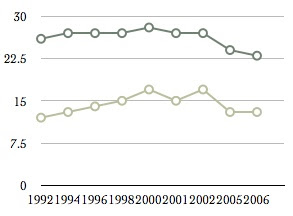 Clearly it shows people are drinking less, a fact borne out by falling alcohol sales in the industry.
Of course the neo-prohibitionists don't like this so they reinvented the 'unit' of alcohol Since 2007, the Office of National Statistics has assumed larger glasses are being used and stronger alcohol is being consumed. They now assume that a glass of wine contains 2 units, rather than 1, as it did before. With beer, what used be counted as 1 unit is now counted as 1.5, what used to be 1.5 units is now assumed to be 2 units and what used to be 2.3 units (a large can) is now counted as 3 units.
The term 'unit' was made up anyway.
So according to the revised data, people are drinking more and of course this is the type of misinformation that the fake charities thrive on - they are dependent on their funding from the Government. They have to keep up the scare stories in order to have the Government continue funding them.

Also in the Western Mail article:
And it follows figures published earlier this week which show that the number of people admitted to Welsh hospitals with alcohol-related problems – including alcohol poisoning – has increased by 30% in the past five years.
Not surprising as changes to data collection — which now include secondary diagnoses, such as alcohol-related injuries — have contributed to the surge in cases.
Once again the data has been changed and manipulated in order to give a false impression.

The whole post on the Devil's Kitchen site is well worth reading.