Newport steps further into the Abyss 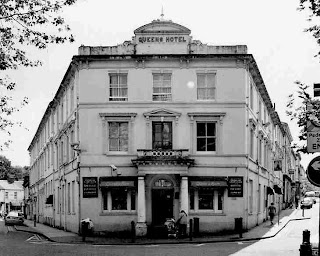 Just when you think the chav-ridden superpub-ghetto that is the City Centre of Newport, cannot get any worse, news reaches the Brew Wales bartop that JD Wetherspoons have bought the lease of Walkabout from Regent Inns. Now normally an Australian theme pub disappearing off the scene would be a cause for celebration, but Newport has seen 42 pub closures in the last 12 years so another get-them-in-cheap-pile-them-up superpub will do nothing for other smaller, often tied pubs which still exist in the City. Who knows, they may even rename the pub 'The Jade Goody' and allow the local pondlife who inhabit the City at weekends to drink out of their plastic cups rather than the cleaner glasses preferred by all except the local constabulary.

Now in a previous incarnation the Walkabout bar was known as the Queens Hotel and when it was owned by Belhaven Inns, the fledging Brew Wales editor had a summer job there. Now this was in the days when what would be described as slightly irregular cellar practises went on there. The pub served Bass, Brains Bitter and Dark and when the driptrays below the handpumps were full, they were emptied into buckets behind the bar. Of course some days there were not enough buckets to fill up, so industrial margarine tubs came to be used. The back bar, known as the Tudor Bar, or to the regulars as 'God's Waiting Room' or GWR, on the account of the age of its patrons, was so constructed that it did not have easy access to the cellar. Hence all this beer would hang around until late at night before being taken back to the cellar and filtered back into the cask. Now this did nothing for the beer quality but as it was the cheapest pint in town, excluding clubs, the members (yes they even made themselves membership cards!) of the GWR, still used to drink the swill.

“There's been a thunderstorm today which is why the beer is not too good”, was one of the excuses I remember hearing from a regular OAP in the GWR. That was the type of pub it was, the customers were the ones who came up with the excuses for the bad beer, not the staff!

The Queens was also a popular place for drinks after hours and the partying would sometimes last until the next morning. Thursday nights were 'over 30' nights at the nearby Ritzy nightclub, which meant that all the fossils/grannies used to pop into the Queens for a few shandies. The term palaeophillia was invented here to describe someone who enjoyed chasing such museum exhibits.

The Queens Hotel was built in 1863 and was purchased by local brewers Phillips in 1904, and by 1924 they were describing it as their flagship pub. Ownership went to Simonds Brewery in 1949, then Courage, Belhaven Inns and the delightfully named Happy Hotels. There may be a few names missing in the ownership list as towards the end the names changed frequently and the Queens was finally Aussified into Walkabout by Regent Inns in 2001. The pub is reputably haunted so any building work had better be sympathetic to those former members of Gods Waiting Room who still hang around the premises.

Below is an advert for the Queens Hotel from the 1950s 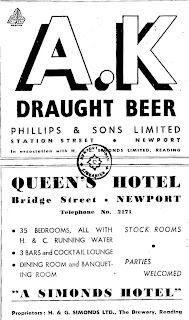 Of course Fido has his take on this story as well

I used to work in the Tudor Bar, in the summer of 1999. Those were fun days. When working in the front bar, we used to place bets amongst the staff ourselves to see what time the first fight of the night would kick off. The old guys in the back bar (Tudor Bar) were brilliant though, although you'd hear the same story a dozen times from 'em in a week.