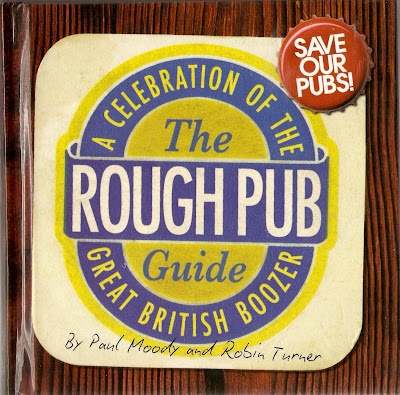 I was surprised to find this book on offer at my local Tesco Extra, though it was almost hidden by books by chefs who are more famous for being famous rather than their cooking. The Rough Pub Guide is a compact (15cm x 15cm) book put packed into its 194 pages are excellent colour photos and some very witty descriptions of “50 of the most extraordinary drinking experiences in the UK”.
The criteria for selection in this guide is:
-The pub has been open for at least 10 years
-The pub has not been refurbished recently
-The pub has “an independent spirit”
Although the last criterion seems a bit ambiguous, authors Paul Moody and Robin Turner, founders of Socialism Magazine, have successfully managed to include the 50 best pubs in the UK, from the 55,000 or so still left open in Brown's Britain.
Flipping through this book I was reminded of quite a few pubs that I already knew – the Cornubia in Bristol, Plough & Harrow at Monknash, Vulcan in Cardiff, Bessies in the Gwaun Valley, even Rodger Wilkins cider farm gets a mention. What struck me though, was not just that I had been to these pubs before, but they were pubs that I liked and had returned to, time and time again. Perhaps the only exception is the Green Man, situated in a corner shop in South West London. Don't think the personal chauffeur of the owner is allowed to drink in that bar he owns. Still that is my only gripe and the authors do put an apology in for it. Another pub that features in this guide is the Ellangowan Hotel in Creeetown which became the Green Man in that documentary film on traditional Scottish religious practices, the Wicker Man.
All in all this is a well-researched book featuring some of my favourite pubs from across the UK. A bit of a disappointment that there are no Sam Smiths pubs in the guide, but they deserve a full book for themselves. Moody & Turner have produced a well-documented snapshot of British pubs in the twenty-first century and the problems they are facing. If there is a message from this book, it is that the British pub is under threat – so if you don't want to lose it -use it. I just hope that there will be enough pubs still open for future volumes.
www.roughpubguide.co.uk