Smashing Time at a Swansea Brewery! 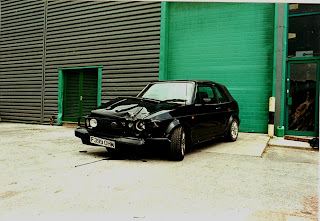 The VW that caused the accident, after being moved inside the brewery compound.

A kindly soul emailed Brew Wales these photos which give an insight into the business ethics of not only the public relations industry but also a member of a well-known Welsh brewing dynasty.
What happened on the day the new brewery in Llansamlet, Swansea, was opened by Rhodri Morgan could be construed as being amusing if something not quite legal occurred.
Things started to go down hill when the boss of the brewery started to heckle the Welsh Assembly Economic Development Manager during his speech to open the plant – the invited guests were cringing in their seats as the Managing Director raged into the funding policy of the Welsh Assembly. Now the brewery MD was reading from a pre-prepared crib sheet, supplied by his Public Relations firm, Ron Lewis Associates. By this stage, even the local TV stations had given up filming as none of this would be fit to broadcast. Well done Ron, your perfect PR opportunity ended up on the cutting room floor! Fair play to Rhodri – he gave the MD a good argument back.
Having allegedly imbibed of a few samples of wine and beer at the opening – Ron Lewis then attempted to drive his black Volkswagen 2-door back to Carmarthenshire but got all of a few yards from the brewery before crashing into another car - a mauve-coloured Lexus. The driver of the other car was luckily uninjured but seeing the “tired and emotional” Mr Lewis, the other driver went off to call the police.
Now here is where the story gets interesting. The black VW was pushed back into the brewery and the gates of the brewery were locked. Ron Lewis was bundled into another car along with the MD of the brewery and driven away from the scene before the local rozzers could turn up to breath test him. Now that would have made the TV news – a brewery opening and a shareholder (5,250 ordinary shares were held by Ron) crashing his car after allegedly over-imbibing in the lavish hospitality of the liquid type freely available at breweries. 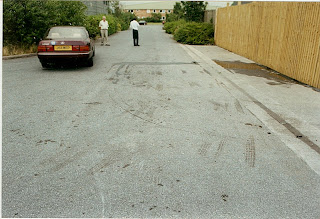 The above photo shows the damaged Lexus and the tyre marks at the scene of the accident. 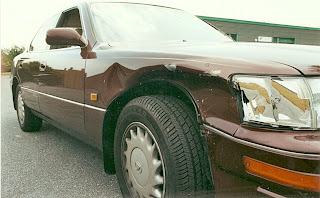 Damage to the Lexus after being hit by the VW

The brewery concerned went into liquidation in May 2002 owing £641,355 to the Government (IR & HMRC) as well as smaller amounts to 140 other creditors. Estimated total debts were over £2,300,000
The brewery currently flourishes under different ownership.
The Managing Director of the brewing company at the time of the opening and who is mentioned in the article above bears no connection to the website below:
www.simonbuckley.co.uk
Ron Lewis is currently running the public relations for the police in the form of the ITV Wales show “Crimestoppers”. So far no cold-case crimes have been broadcast covering anyone fleeing the scene of an accident or allegedly perverting the course of justice and there's little doubt if the “Swansea Smash” will be covered. So just enjoy the photos and fell free to use them for any purpose.

It is an enormous shame Arfur that you choose to make miss guided and thoroughly erronious comments in a public place.

You should also be careful to make sure that the comments you make are both factually correct, and that the supposed stories you put to-gether, are correct. No doubt this story produced some 8 years after the event are purposefully light on detail and accuracy because you choose to try and malign me.

Rest assured you have not heard the last of this or your scurrilous attacks on me personally in other blogs, which I will refer to CAMRA for their comments on your behaviour.

Why dont you have the balls to stand up and put your name to the articles you write, so that then you can defend the defamation actions that will result following your ditherings.

I hope you realise what is coming.

I'm all for having a laugh, but don't you think this is a little far? especially when the damage to black vw seems to me as though it is on the wrong side to have damdged the lexus in that way. Also surely if the Lexus should have more damage to it if that is the effect that it had on the vw? Maybe i'm wrong about the damage but either way this seems a pointless story for a website that is supposed to be promoting Welsh Brewerys. We should be hailing all the success stories not reducing ourselves to slanging matches in the school ground.

I assume that's you writing as 'Family Brewer' Simon Buckley?
Unlike you I do put my name to my articles via my email address, my Facebook account and my Twitter account, all of which are visible on the Brew Wales site.
As usual your insulting ramblings and threats are due to your own paranoa and insecurity, both of which you proved in your deranged phone call to me on the morning of the 16th March.
This blog has nothing to with CAMRA - read the disclaimer.
If you want to address the specific points made in the blog then do so - you have the full right of reply here. Instead you once again lower yourself to petty insults and personal vandettas.

You must have had a bad pint of Evan Evans mate. I have always found it excellent beer and very much in the Welsh tradition. Very drinkable.

In case anyone is tempted to believe this malicious piece of fantasy, allow me to put the record straight. I, Ron Lewis (yes, I’m happy to give my name) was the driver of the black VW. My car was hit by a Lexus, driven at speed, outside the brewery. You can see from the pictures which car was more seriously damaged. I was fortunate to escape serious injury and had to be freed from the wreckage. It was the driver of the Lexus who left the scene of the crash without giving his name, address or insurance details. My car was pulled inside the brewery compound for reasons of safety and security. In a state of shock and having no other transport I was driven home by friends. (It’s also a matter of record that at the time Simon Buckley left the former Tomos Watkin company all the taxes were up to date. Simon was later cleared of any wrong-doing by HMRC and the DTI. He also won a High Court action against his former employers, being awarded £55,000 in damages.) I am surprised and puzzled by this gratuitous and unpleasant piece of back-stabbing nearly nine years later. I too am persuing this matter with CAMRA.

Ron - this has nothing to do with CAMRA - there is a disclaimer on this site. The driver of the Lexus was the one who went to get the police - you decided 'for whatever reasons' to leave the scene of the accident before the police could turn up and breathalyse you as is standard practise in car accidents.