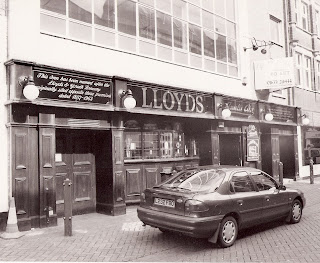 A former Newport city centre pub is to reopen with a better beer range and offering much improved quality. Lloyds on Cambrian Road, okay went under the name of Jarcals for a while, has been completely stripped out and refitted and will open as..........a Tesco Extra! Offering bottles of Theakstons Old Peculier, Czech Budvar and Black Sheep this will drastically improve the beer range in the half-derelict half built ghetto that Newport City Centre is at the moment.
Can't say I'm sad to see the pub go - beer used to be awful even in the days they did real ale. It was an Ansells house as the Brummie Brewery had bought up Newport brewers Lloyd & Yorath in the 1950s. After demolishing the brewery - it became an open-air car park for years as Newport was never improved by the Luftwaffe to any great extent, we had to rely on post war demolition to get our town to look like a bomb-site - Ansells had their local HQ above the Lloyds pub. Ansells Best was the standard beer or if you were lucky a warm pint of Tetleys could be found. Occasionally, the very rare Burton Ale would be found, even rarer would be finding it drinkable!
Ansells once dominated Newport, now very few of their former pubs are even open. Photo below is of the Tredegar Arms, Pill, taken in about 1997 before the area was "improved" ie, demolished. 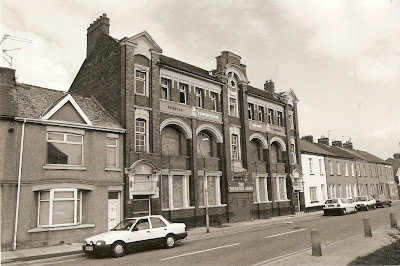 Regarding Newport Pubs was walking past the one opposite the Hornblower they had a council letter in the Window saying nobody could stand outside smoking, Drinking or Swearing!

Also said no residents of the pub where allowed to be abusive or aggressive to members of the public.. Still people outside smoking mind