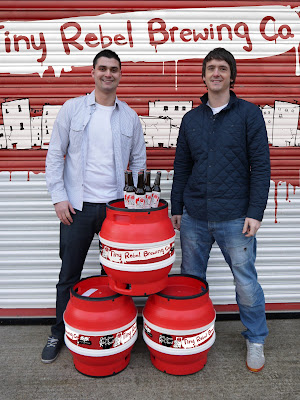 
The brand new brewery which covers almost 3000 square foot, operates out of the Maesglas Industrial Estate in Newport, was originally established by brothers-in-law Gareth Williams and Bradley Cummings in 2011 in a garage with no more than a few barrels and some hops. What started as a hobby is now a start up company ready to launch its bespoke brews for the first time.
Specialising in producing retro beers with a modern twist, the company will initially be launching two beers, FUBAR and Urban IPA, available in both cask and bottles to the market this month. It is hoping to expand to producing an additional six beers by the end of 2012. The company’s new premises will allow for a 10 brewers barrel plant, enabling a brewing capacity of 1640 litres per brew which while create an output of 80 casks per week.
Mechanical and electrical engineers by trade, Bradley and Gareth decided to turn their passion for brewing into a viable business and new way of life. On speaking about launching the brewery, Gareth said: “We are extremely proud to be the only micro brewery in Newport and we hope the local community are as excited as we are to be here.
“Brewing is our passion and we experiment and innovate with a purpose. We let our imaginations run wild and we are always excited to see the results.
“Cask ale has seen a resurgence over recent years with many people switching back to beer from lagers. We hope that our new mix will continue this trend and see even more people making the switch to craft beer.
“Wales has such a great range of home grown beers and we hope that ours will add to the offering and really put Wales on the map as a brewing nation.”
The new brewery is currently fronted by Bradley and Gareth and they have future ambitions of supporting the local community by employing a further 100 over the next three years with the opening of further pubs and craft beer bars. It has already successfully collaborated with two pubs the Navigation Abercynon and the Commercial Inn Pontymister in making these their tap houses.
Bradley added: “Newport is our home town and we wanted to give something back to the community. The continuing regeneration of the area makes it an ideal location for us with great investment and recruitment opportunities and we hope, in years to come, that we will be a recognised employer in the area.”
Tiny Rebel beers are available in the Commercial Inn at Pontymister and the soon-to-reopen Navigation at Abercynon, Beerd Bar Bristol and other cask beer pubs in and around Newport.
The brewery currently produces two beers FUBAR  and Urban IPA
FUBAR – 4.4% Pale Ale
A unique schizophrenic beer where you’ll face off against floral hoppy flavours up front, leading into a fry spicy bitterness on the back. Need something a little different to wake up your taste buds? It’s time to get a FUBAR!
Urban IPA – 5.5% Indian Pale Ale
A carefully crafted intercontinental blend of hops helps us take traditional IPA’s to the next level in our Urban IPA. If you’re bored with soulless IPA’s drank by farmers in wellies, it’s time to go URBAN.