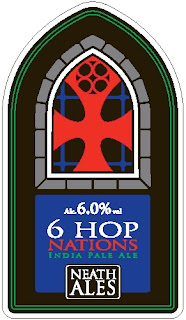 It's that time of year again when men with oddly-shaped balls chuck them around the field to the cheers of shouting fans. I don't mean the Superbowl either where heavily-padded Americans stop every few seconds and Madonna comes on at half time. Yes it's the 6 Nations and the brewers of Wales have been coming up with some beers to go with the rugby as everyone knows rugby and beer go together well.

First up is Hop Head Jay at Neath Ales with his 6% 6 Hop Nations IPA. Now his Green Bullet is one of my favourite beers but for this one-off Jay has sourced hops from 6 Nations for this beer, unfortunately he could not get the hops from the Nations participating in the cup as Scotland and Italy are not favoured climates for growing the 'pernicious weed', however he does have this to say about his beer:
" I decided on some subtle hops which lead to a really complex flavour rather than one which smash you in the nose: the ones which are evident in the taste are lots and lots of Northdown, lots of Hallertauer, and a seasoning of Pacific Gem". 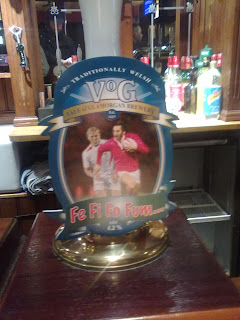 "Vale of Glamorgan Brewery return with their Fe Fi Fo Fum, a 4.3%, a copper-coloured Best Bitter with ' subtle malt flavour and hop varieties giving the aroma and taste reminiscent of the hedgerow'. Not too sure what that actually means? Does it smell of badger piss and taste of bird droppings? 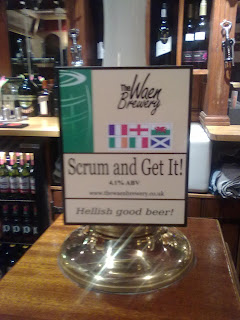 The soon-to-be-moving Waen Brewery of Powys have also produced a Best Bitter, this time called 'Scrum and Get it'. I did try try some last week but I found it unbalanced in flavour tasting like not very good home-brew but some others have had positive things to say about it so each to their own!

Finally Brains bring back 'Bread of Heaven' a 4% ABV beer.
Named to embody the spirit and passion of the Welsh Nation, Bread of Heaven is handcrafted to celebrate Brains’ sponsorship of the Welsh National Rugby Team and is the official ale of the 2005 and 2008 Grand Slam.
Its rugby ball-shaped logo features the WRU Official Ale logo and the words ‘Bread of Heaven’ and ‘feed me till I want no more’ from the famous Welsh hymn, ‘Guide Me O Thou Great Redeemer’.

A traditional cask ale with a distinctive reddish hue and a rich hop aroma, finely balanced by a more-ish fruit finish.