M & B to spend £1million on pub refurbishment 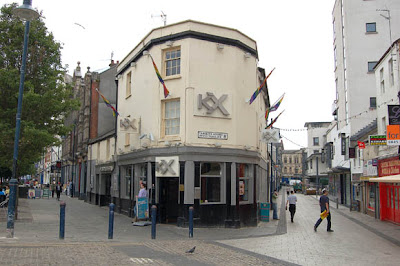 
A pub company wanting to spend money improving a pub? Well that's a story in itself. In Newport the branches of buddleia get longer on the pub roofs with no pub company willing to spend money in the deteriorating commercial centre that is so bad even established shops such as Burton and Marks & Spencer are moving out. Of course this story is about a pub in the thriving area of Cardiff City Centre and any such investment in a premises should surely be welcomed?
M & B have applied for planning permission to change the Kings Cross pub on the corner of Caroline Street and Mill Lane into a pub and bistro restaurant.
A spokesperson for M & B said, “The signage application confirms our intention to rename the pub to the Corner House in order to give the new business its own identity as the offer will be different to the existing late-night drinks-focused operation”.
If planning permission is approved the Kings Cross, which opened in 1872, will close in September and reopen in November.
The exterior of the building will not change significantly and the interior will feature a new marble bar and a first floor restaurant.
All sounds good doesn't it? A million pound refurbishment to convert what is primarily a drinks-led late night venue into an bar and restaurant. Who could possibly object?
Well more than 2000 people have signed a petition to keep the Kings' as it is because it is Cardiff's oldest gay pub. The signatures include the vertically-challenged leader of Cardiff City Council, Rodney Berman, a pint-sized Pict so unpopular in parts of the City his photograph was recently pinned to the dartboard of one Cardiff pub and used as target practise.
Now it's not that Cardiff does not have a choice of gay venues, nearby the Grade II listed Golden Cross advertises itself as 'Cardiff's Premier Gay Pub' so I can't see what the objections are to M & B wishing to improve their pub.
If you lived in Newport you'd be grateful for any pub company spending money on any pub!