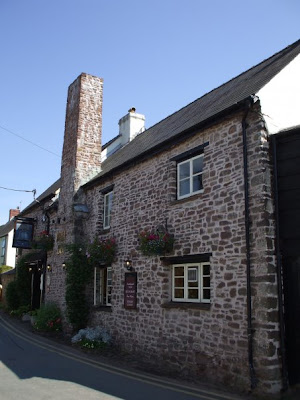 The award-winning Bell Inn at Caerleon has another feather in its cap as today it was announced that it has won 'Cider Pub of the Year 2011' for South & Mid-Wales.
The village pub, set on Bulmore Road, a short walk over the Usk bridge from the main part of the village, has gained a reputation for cider since the previous tenant decided to start offering up to 20 different ciders and perries, both on draught and in bottle. New landlord Lee Taylor has kept and expanded the range and the Bell is now firmly established as the cider drinking pub in this part of Wales.

Article I previously wrote about the pub:

Situated across the river from the Roman fortress of Caerleon, the late-medieval Bell Inn is unmissable with its large chimney stack projecting out into the road and honeysuckle growing against it. This type of building is known as a lateral chimney house and when originally built the fireplace would have heated a large open hall, the present ceiling and first floor being inserted in the early seventeenth century. The stone-built fireplace has been partly filled in with building stones over the years but its arch shows how big it used to be. A black metal wood burning heater now stands in the fireplace, nowadays ample enough to heat the pub in winter. Above the fireplace are hung some of the awards this pub has won throughout the years. The Bell was a coaching inn in the eighteenth and nineteenth centuries and next door was a large malthouse to produce the vital ingredient to the pub's beer.
On entering the Bell there is a restaurant area to the left and a bar to the right. Exposed stone walls, dark wooden beams and flagstone floors add to the ambience of this historic inn. Settles and wooden chairs provide the perfect resting place to sit back and enjoy the live Celtic Music on Wednesday nights or the Jazz & Blues Sunday afternoons. Paintings from local artists are displayed on the walls and are available to buy.
There are three real ales on the handpumps featuring beers from breweries such as Charles Wells, St Austell and Black Sheep. The fourth handpump is reserved for a cider from International Cider Producer of the Year, Gwynt y Ddraig and features a rotating cider from their range such as Dog Dancer, Black Dragon or Brown Snout. To the left of the bar is a chalkboard with the different ciders and perries available, the Bell specialises in cider and offers around 20 different types, both still and sparkling. The draught ciders are served from the cellar as well as from the handpump on the bar. The Bell has previously won CAMRA Cider & Perry Pub of the Year for Wales and has even been a finalist in the UK national competition. The ciders often find their way onto the Bell's menu, being used as an ingredient in their award-winning chef's recipes.
The Bell features a car park to the side of the pub and there is a split-level outside drinking area decorated with colourful garden plants towards the rear. The Bell also hosts regular beer and cider festivals throughout the year.Bell Inn, Bulmore Road, Caerleon, NP18 1QQ