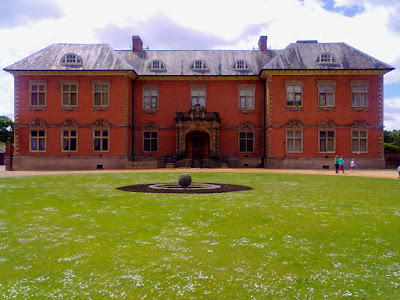 A little later in the year than usual, but Gwent CAMRA are set to return to the historic setting of Tredegar House this weekend for the 22nd annual  Folk Festival.

Beers have been arriving today, though not all the ones we hoped for. Still at least the fantastic Neath Ales are up on the stillage!

For those of you on Twitter I shall be using  #THFF for updates about the Festival. Should be amusing on Thursday when I taste all the beers!

Celt Experience Brewery
Based in Caerphilly.
Golden 4.2% ABV
A golden organic ale with a spicy aroma and a taste of citrus fruits.
Dark Age 4.0% ABV
A new beer, no tasting notes yet!
Native Storm 4.4% ABV
A robust mid-brown ale full of spicy hop and biscuit flavours.
Hereford Brewery
Originally called the 'Spinning Dog Brewery', based in the Victory pub in Hereford.
Owd Bull 3.9% ABV
A light copper-coloured session ale with an initial bitteness and a hoppy aftertaste.
Hereford Best Bitter 4.2% ABV
A full-bodied amber-coloured best bitter, rich in malt undertones with a fresh and fruity aroma.
Celtic Gold 4.5% ABV. In the Brewhouse Bar
A crisp golden beer with a well-rounded malt/hop bitterness.
Kingstone Brewery
Based on a farm in Tintern.
Gold 3.8% ABV
A rich, golden-coloured hoppy ale.
Classic 4.5% ABV
A well-balanced hoppy, dry ale.
Neath Ales
A new brewery, established last year and has already gained a reputation for imaginative and hoppy beers.
Eazy Peazyn 3.7% ABV
A very pale and extremely refreshing session beer.
Gold 5.0% ABV
Neath Ales Gold is a deep amber colour and has a rich aroma of citrus fruits and orange marmalade, caused by the First Gold hops used to brew this beer. A smooth bitter initial taste leads on to a very complex aftertaste with the true bitterness coming through a good few minutes after drinking.
Green Bullet 6.2% ABV
Green Bullet is the name given to a variety of hop grown in New Zealand and this beer is an amber coloured beer with a complex aroma of sharp, fruity citrus flavours from the hops matched with the biscuity aroma of the Maris Otter Malt used to brew this beer. The sweet,malty biscuity flavour is also present in the taste before the unique flavour of the hops provides the bitterness at the end. This is surprisingly drinkable for a 6% beer, a wonderful example of a traditional Indian Pale Ale beer style.
Otley Brewery
Current Champion Brewers of Wales, based in Pontypridd.
O2 4.0% ABV
A light copper coloured ale with citrus and floral aromas and a satisfying bitter aftertaste.
O-Garden 5.0% ABV
O-Garden contains coriander, cloves and orange peel. This pale amber, cloudy wheat beer has a rich aroma of coriander with a slight aroma of citrus. The coriander flavour continues into the taste and is a matched by a sharp bitterness caused by the hops used to brew this award-winning beer. This results in a pleasant dryness in the mouth and the aftertaste is of hops and coriander.
O5 5.0% ABV
A golden-coloured ale brewed with American hops.
Purple Moose
An award-winning brewery based in Porthmadog.
Snowdonia 3.6% ABV
A refreshing pale ale brewed with Pale and Crystal malts and 4 different hop varities.
Dark Side of the Moose 4.6% ABV
A dark and delicious ale with a deep malt flavour from roasted barley and a fruity bitterness from Bramling Cross hops.
Rhymney Brewery
Based in Merthyr Tydfil, this family-run brewery will be moving to a purpose-built site in Blaenavon later this year.
Hobby Horse 3.8% ABV
Hobby Horse is a mid to light-brown coloured beer and has a slight biscuity aroma due to the Marris Otter malt used. Other malts used are Crystal and Caramalt. Hops are also present in the nose with Styrian and Fuggles varities providing the bitterness as well. Hobby Horse has a bitter-sweet taste followed by the distinctive biscuit flavour of the malt and some lasting bitterness and astringency in the aftertaste. A lot of flavour for a low-strength beer.
Bitter 4.5% ABV
Brewed using 4 different malt varieties together with 2 different hop varieties.
Premiere Lager 4.5% ABV
A new recipe for this year, brewed with Green Bullet hops.
Tomos Watkin Brewery
An award-winning family owned brewery from Swansea.
Cwrw Haf 4.2% ABV
A light-coloured ale packed with the citrusy flavour of hops.
OSB 4.5% ABV
A rich red premium cask ale with a fruity aroma and distinctive bitter flavour.
Wye Valley
The Wye Valley Brewery of Herefordshire was established 26 years ago and has gone on to win many awards since.
HPA 4.0% ABV
One of the greatest beers in the world. A pale ale with a citrus hop aroma, just the right amount of bitterness and a dry finish.
Butty Bach 4.5% ABV
A copper-yellow, malty and fruity ale.
DG Wholesome Stout 4.6% ABV
An intense black colour and has a rich aroma of chocolate and roast flavours. Brewed with Maris Otter pale malt, the colour comes form the use of flaked and roasted barley with bitterness provided by using Northdown hops. The flavour is rich, smooth and chocolatey with some bitter roast flavours towards the finish. The bitter chocolate flavour lasts well into the aftertaste.
Ciders and perries will be from award-winning cidermakers Gwynt Y Ddraig.
An old article of mine about brewing at Tredegar House can be found here.

Tredegar House is easily reached by bus from the centre of Newport, number 36, or by bus from Cardiff and a short walk.
Journey Planner:

Unfortuantly in Tenby this weekend, damn.

Isn't Warcop brewery jut around the corner? nothing from them?