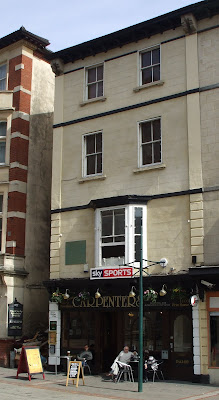 The Carpenter's Arms in Newport has had a refurbishment. A bit surprising that any pub company would want to spend money on a Newport pub, but this pub is run by the local JW Bassett Pub Company. Being a South Wales-based company they know their market and run pubs from Penarth to Kilburn with the historic Queens Vaults in Cardiff being their most well-known outlet.
Well how has the refurbishment gone? New carpet, wallpaper etc, brass foot rail along the length of the bar and 4 beers on gravity in the centre of the bar. Yes, chilled casks from SA Brain with SA, SA Gold, Rev James and Buckleys Best served straight from gravity with Felinfoel Double Dragon and Celtic Pride on handpump as well. Onlly tried the SA Gold so far and its far superior to when it is served by a swan neck handpump, the tight, creamy head suits beers like Dark but not SA Gold. The bottled version of SA Gold is even better and retains more hop character than the cask version does, any that's a digression for another post! Back to the Carps!
Some good bits of art on the walls with local rugby and football legends featured, even the legendary Arthur Gould from the nineteenth century gets a portrait on the wall!
Pubs before in Newport have tried beer straight from the cask, though not in recent years. The Ale House (ex-Sovereign Bar) in John Frost Square had a cooled stillage but that place has been demolished, JD Chaverspoons occasionally had some stillage up in their pubs during their festivals but have stopped doing that since our falling out. 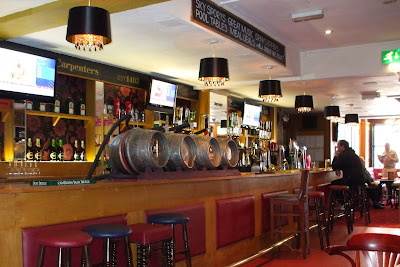 Hopefully this will get the real ale drinkers of Newport back into pubs, the Carpenters refurbishment is an example of what can be done if someone has an ambition or idea to try something different in a City Centre pub. 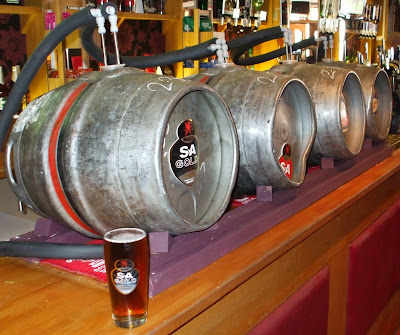 The pub also does WiFi and this post was live blogged with the help of SA Gold!