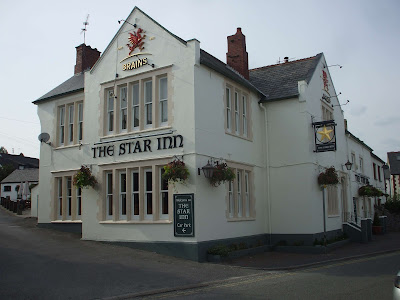 Star Inn, Station Road, Dinas Powys, Vale of Glamorgan, CF64 4DE
Open all day
Located in the heart of the village, the Star is a white-washed building with narrow sash windows. A five-pointed golden star acts as the pub sign and the unmistakable red and gold dragon of brewers SA Brain takes pride of place at the apex of the building. 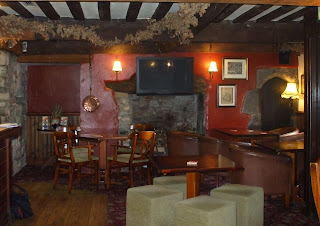 From the outside the Star appears to be an early twentieth-century building but this extension hides an original building that dates back five-hundred years to the reign of Henry VIII, making the Star the second oldest building in Dinas Powys, after the castle. The entrance from Station Road leads up a few steps to the oldest part of the building, situated on the right side as the customer enters. A large stone inglenook fireplace with a wooden beam across the top is original and to the right of it is an arched stone doorway that leads to a spiral staircase, a stout wooden door with decorative iron hinges guards it shut nowadays.
This room was the Tudor hall (pictured), the now blocked-up doorway to the left of the fireplace lead to what was then the kitchen of the original building, the Old Court, next door, is today a separate building but in the 1500s these were one building. The ceiling consists of large cross-beams which are decorated with hops strung across them. The Tudor hall also features exposed stonework and red plaster around the fireplace as well as tables and chairs around the room. The original Tudor hall forms only a small part of the pub today, the early twentieth century extension has vastly increased the size of the original building and almost masked it.
Opposite the Tudor fireplace is a more modern Edwardian fireplace and the floor is made up of wooden blocks in a herringbone pattern. This leads to the bar servery which stretches out towards the rear of the pub. To the left is the extension which provides more seating and a dining area and views of the village of Dinas Powys can be seen through the narrow sash windows. At the rear of the Star Inn there is a beer garden/patio area and a large car park. There is a wheelchair lift providing disabled entrance from the rear car park.
The handpumps on the bar serve a range of real ales from SA Brain including Dark, Bitter, SA, SA Gold as well as guest beers from other breweries. Food is served all day and chalkboard menus supplement the already extensive standard pub menus.
Google Map:
View Larger Map