Assembly Member in call to Save the Vulcan 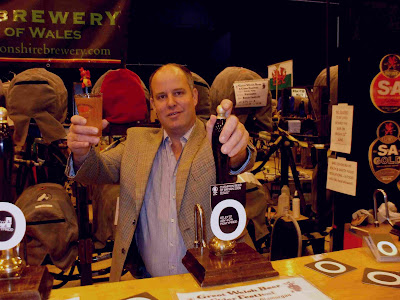 Above: Assembly Member Andrew RT Davies pours a beer brewed in his constituency at the Great Welsh Beer & Cider Festival
The Assembly Member for South Wales Central AM, Andrew RT Davies, has urged developers to
look again at plans to demolish the Vulcan Hotel in Cardiff City Centre. He has called on developers to
incorporate the 19th century public house into amended plans, thereby preserving one of Cardiff ’s oldest
pubs. Mr Davies, who sits on the National Assembly for Wales ’ Petitions Committee, said: "I agree
wholeheartedly with petitioners that it must be possible to incorporate the Vulcan into their designs, and to preserve this piece of Cardiff ’s cultural and architectural history. It is very sad to witness the gradual decline of the traditional pub and this is one of the last of its kind in the heart of Cardiff city centre."
The petition, raised by Rachel Thomas, urged the Welsh Assembly Government to use all of their power to protect the Vulcan from closure and received 5000 signatories. Mr Davies said: "It is to be welcomed that the Minister for Heritage has pledged Welsh Assembly Government support for the UK government’s proposed Wales and England Heritage Protection Bill. However, given the legislative timetable at Westminster that bill
may not arrive in time to save The Vulcan."
"The Minister also mentions the fact that discussions are on-going with his officials in Cadw and those within
the Assembly ’s Planning Division about possible measures to protect buildings of local importance. Given
the urgency here, one can only offer direct appeals to the developers themselves, in the hope that they
may acquiesce and work the current site into their plans. I remain hopeful that they will see sense and pay due
respect to the wishes of locals in recognising the cultural and historic significance of the site."