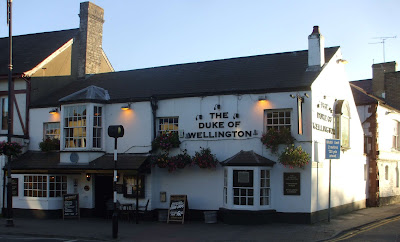 Duke of Wellington, 48 High Street, Cowbridge, Vale of Glamorgan, CF71 7AG
Open all day
The market-town of Cowbridge was once home to many old pubs and coaching inns and the Duke of Wellington is a rare survivor from those days. This two-story whitewashed building looks small from the outside but this is deceptive as the pub stretches back from the road quite a way.
The pub was not always called the Duke of Wellington and had acquired this name by at least 1844, in honour of the Iron Duke who used to stay here whilst on his way to visit the family of General Picton in Pembrokshire. The first mention of this building as an inn with stables and brewhouse was in 1662, although the building is not named, by 1760 it was called the Half Moon and a few years later may have become the Cowbridge Arms before being renamed again in 1829 as the Black Horse and by 1831 another name change occurred, this time to the Coach & Horses. The Duke of Wellington pub was sold to SA Brain in 1919 and the company still own this historic pub today.
The main entrance to the pub is from the High Street with a short corridor leading to the bar on the right and the dining area to the rear, there is also another room to the left, these rooms are perhaps the remnants of the medieval floor plan of the original building on this site. The bar area is spacious with plenty of seating, exposed stonework and blackened beams. The real ales, served from gleaming brass handpumps are Brains Dark, SA, SA Gold and Bitter or there are bottles of Gwynt Y Ddraig Welsh cider also available. There is also an outdoor area towards the rear with comfortable seating, a real sun trap in the hot weather.
The dining area to the rear was once an open courtyard in the days when this pub was a coaching inn and one of the features from those times is a well which now is now a focal point of the room, although claims of its Roman origins are a bit far fetched.
There is an extensive menu available at the Duke with chalkboards offering interesting additions to the usual pub fayre. Sausages made with SA Gold are one of the specialities and there is even a Reverend James chutney to match the Welsh cheeses on the menu. The pub is open all day and food is served 12-9pm Monday to Saturday and 12-5pm on Sundays.
One of the more unusual features of this pub is the function room at the very rear of the building. Built on the site of the old stables around about the time of the First World War, this is a mock-medieval art deco construction that has to be seen to be believed with its huge fireplace and even a minstrels gallery. During Cowbridge Food Festival in October the pub is the venue of a cider festival with around 30 different ciders and perries on sale.