Crown - a lost pub of Cardiff 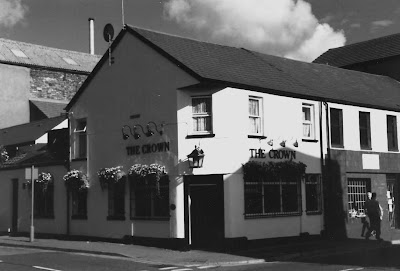 The Crown
Another lost pub of Cardiff, the Crown was situated at 37 Bute Street on the corner with John Street, opposite the Custom House and but catered for a slightly more upmarket clientèle. In fact the shadow falling on the Crown in the above photograph belongs to the Custom House. I previously wrote about the Custom House and the Glendower here. All 3 pubs were demolished, together with most of the other buildings in the area to create what we see today. The Crown was quite a popular pub, despite its small size, and was home to a parrot called Captain as well as regular live music. The live music varied and often included impromptu performances from members of the Welsh National Opera who were based nearby and would pop in for a pint and a song. The pub was, I believe, owned by Ansells Brewery at one time but Sycamore Taverns were the owners in 1996 according to Dave Matthews' Complete Guide to Cardiff Pubs. There never was an exciting beer range in the Crown, but always a good pint of Tetley or Worthington Best.
This photo was taken in 1995 and the pub was demolished a few years later.
This image from Google Maps shows that the area is still undeveloped
View Larger Map
Another photo of the pub is here on John Briggs flickr site,  it also has some great photos of Cardiff Bay before the redevelopment.

The audio and video recordings on this post may be of some interest to you, Arfur!

One of the last landladies was a club singer. I can't think of her name, but she was very friendly. Her ex-husband was her guitarist, and was very good. Unfortunately he got cancer, and became terminally ill. His dying wish was to play a Shadows tune live on TV, and it was arranged. I saw him playing, a very moving performance, and he died a few days later. I miss the pubs around the end of the docks. The Custom House, Glendower, Crown, Glastonbury, Fishguard, Salutation, the Golden Cross as it used to be, and of course the Vulcan.

My great aunt Josie and Stan run it for many years during the 70s and 80s.

Such a shame that it was demolished. It was run by my 5x great auntie and uncle, Grace (nee Rowe) and Joseph Henry Treglohan Boase; Joseph died on the premises on 1 November 1880. Wish I could have seen it. Thank you so much for the photo :)

Hi there, I'm related to Josie through my Dad - who's a Creed. It'd be good to find out how we're related!