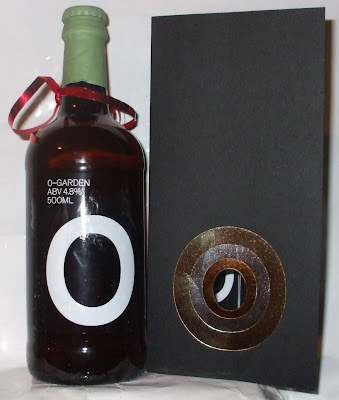 Current Champion Beer of Wales winners, the Otley Brewery of Pontypridd, have recently celebrated 5 years of brewing their award-winning beers. Their tally of awards is quite impressive – 22 Gold's, 7 Silver's and 8 Bronze certificates, including national championships. Added to that their entire pub estate features in the CAMRA Good Beer Guide, okay its only 3 pubs but the Bunch of Grapes, Otley Arms and Rickards Arms are all worth popping into. New Year's Eve saw a beer festival in the Bunch and these events are going to be running every couple of months there. With  regular beer festivals in the Bunch, featuring great beers such as Brewdog and Thornbridge together with specials from Otley, it looks like I shall be paying a few more visits to the Bunch this year. Some of the special brews from Otley will be featuring guest brewers such as beer writers Adrian Tierney-Jones and Roger Protz.
Here's to the next 5 years!
Oh and the picture is of my Christmas Present from the boys at Otley. Cheers lads!


Otley O-Garden, 4.8%, tasting notes:
Spices have been used in beer making for centuries, both as a preservative and for flavour and O-Garden contains coriander, cloves and orange peel. This pale amber, cloudy wheat beer has a rich aroma of coriander with a slight aroma of citrus. The coriander flavour continues into the taste and is a matched by a sharp bitterness caused by the hops used to brew this award-winning beer. This results in a pleasant dryness in the mouth and the aftertaste is of hops and coriander. Try matching this beer with food – a curry seems the ideal food to match with the flavours in this beer.
Availbale via RealBeerBox