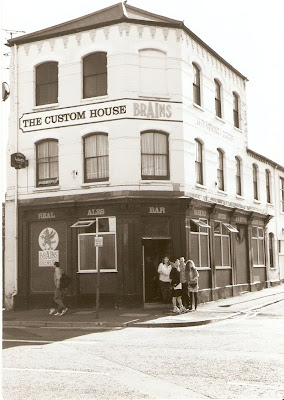 View Larger Map
Sorting through some old photographs the other day, I came across these couple which I must have taken back in the 1990s. Both on opposite ends of the same street, the above photograph shows the infamous Custom House, a local pub popular with the certain sections of the community who would ply their trade along the length of the street and in the pub itself. In one of Dave Mathews Guide to Cardiff Pubs books, the landlord is quoted as saying, "We do not have a condom machine in the toilets as we give them away for free!" Have embedded a photo from Google Street View as to what the area looks like today. 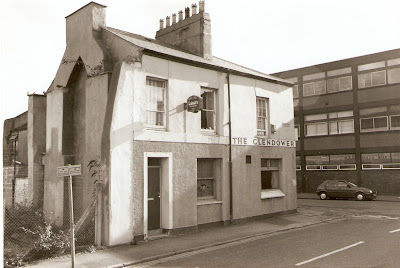 The Glendower was the other end of the street and was another Brains pub, though slightly smarter than the Custom House, the ladies of the night would often change clothing in the toilets, bustling their way through the amused customers who would often be at a CAMRA meeting. This area was only redeveloped about 10 years ago but it seems like so long ago that Cardiff had such characterful pubs and customers to match. The City Centre is now almost totally devoid of small pubs and the ladies of the night have retreated to the massage parlours of City Road and even the Trumpet of Truth has stopped printing their 'personal adverts'. How much has changed in the last 15 years!

The Glendower was always worth a visit, good Brains beers, lively customers.

The Custom House was interesting - often you'd get into conversation with somebody, and find yourself talking to a vice squad cop!

As long as you behaved yourself you were OK. Misbehave, and either the landlord (in the back of the photo) would physically throw you through the door, or one of the regulars would.

Sadly both are long gone.

Pat, one of the girls, was a regular at the Custom House. A busty, bleached blond, with a strong Cardiff accent and very nice. She was always collecting money for charities and was in tears the night Bing Crosby died.

Vic Parker, the legendary guitarist was a regular here, and he often borrowed my Football Echo on a Saturday evening!

Used to work opposite the Glendower, had many a lunchtime and afterwork pint in there, great pub

My father was the last landlord of The Glen before it was demolished ..damn shame no pubs like this exsist in Cardiff anymore

We used to practice with our metal band in the arches across the road and pop in the Custom or the Crown for a pint, great pubs, proper!

We used to practice with our metal band across the road in the arches and pop in the Custom or the Crown for a pint and a dusty ham roll...great pubs, proper like!

My father was a regular in the Custom House. Everyone knew him as Big Len, due to his 57 inch chest and 30 inch neck. He was a formidable Tiger Bay street fighter but despite that was a really lovely man.

Aye. SWS practiced over in the arches too, by the National Opera. It was convenient for The Terminus/Sam's and the Lion's Den, and more importantly beer, though we'd get propositioned by the girls at the start. They were friendly, even motherly once we got to know them. Sadly, the practice room door got kicked in and our amps nicked, which put a dampener on things.