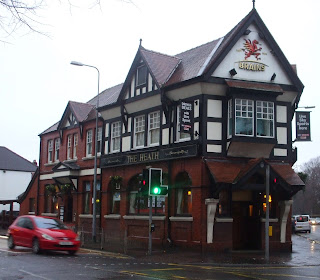 Heath, 2 Whitchurch Road, Cathays, Cardiff, CF14 3LW
The Heath pub stands on the corner of Whitchurch and Allensbank roads with its red-brick and half-timbered exterior being an early example of the building style known as 'Brewers' Tudor'. Built in 1899, the Heath has been extended in the past one hundred years with an extension to the side but the pub still retains some interesting and historical features including a blue and white stained glass window with 'Bar Parlour' above one of the entrances.
The front, corner bar has a traditional yet feel to the place, with seating against the wallls, providing a large open interior with plenty of room, even for the pool table. The bar is made from a light-brown coloured wood and features gleaming handpumps and glistening steel tall fonts. The walls are decorated with photos of old Cardiff and there are some original plaster reliefs of national symbols and coat of arms high up on the walls as well. A large mirror from an old, now defunct brewery is on one wall, this originally came from the former Custom House pub on Bute Street. A large projector screen hides this mirror when major sporting events are on. Behind the bar are trophies won by the local bowls team and there is a darts board to the side.
The rear area is accessed by going through two wooden doors and this extended area has a more contemporary feel to the place with sofas, roof lights and raised seating areas together with an outside smoking area with more tables. The walls are decorated with modern art and a large round mirror helps make the most of natural light in this bar. Wide screen televisions show either music videos or sporting events. There is plenty of seating and tables in this area for those wishing to dine.
To the side of the extension is what remains of the original interior of the pub, in the 'Tudor room', which is quite a surprise to find in any Cardiff pub as most refurbishments have done away with wood panelling. The dark wooden panels contrast with a white fireplace surround, providing a secluded and popular part of the pub, away from the sometimes intrusive televisions and music.
Food is served all day from an extensive menu and there are also chalkboards announcing specials such as curries and 'Pie of the Week'.
As the pub is owned by Brains the beer range features their beers, Bitter and SA but the Heath also has an active guest beer policy with two guest beers usually on as well. Recent guest beers have included Thwaites Brewery from Lancashire and the delicious Ringwood XXXX Porter from Hampshire.
Google Map:
View Larger Map
Plenty of buses stop nearby so access by public transport is very easy.

This used to be a pub full of local characters, nowadays it's a tired mirror of the other modernised Brains pubs (like the nearby Flora and Crwys). I hate them.

I'll check out the mirror the next time I'm there, it was never in a prominent position being in the front room, on the corridor wall to the right of the bar. After the Custom House the mirror moved to the Duke of Wellington for a few years before moving here.

Just visited today and the mirror is still there, in the front corner room by the dartboard. Beers on: Bitter, SA, Rev and the superb Beardface Milk Stout