The City centre of Newport is dying and has been for years. With the news that Marks & Spencer are moving to an out-of-town shopping centre another nail in the coffin has been hammered into the commercial centre of the city. There are only 1 or 2 pubs worth drinking in; the Pen & Wig and of course the Murenger, the rest being Chaverspoons or day care centres for the mentally ill, yes Barracuda pub group, you know I mean you. Barracuda run the Page in High Street, one of their worst pubs in their group, yet also manage to run the excellent George in Chepstow – a complete contrast to their Newport outlet and well worth going in.

It is hardly surprising that so many pubs are either closed or up for sale in Newport, the City Centre with its boarded up pubs and shops is not a nice place to walk through and I much prefer to drinking  in Cardiff rather than Newport.
So a look at the Sidney Phillips website reveals what pubs can be had in the City: 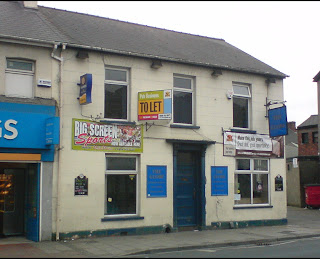 The leasehold of the Oddfellows in Maindee is up for £23,700 and the lease of the Royal Albert is going for £25,000 whilst nearby the freehold of the Globe (pictured) can be had for £145,000. Maindee also has a Chaverspoons and another superpub called the Banc so any incoming publican would have to compete with the prices offered by those places. The Oddies, Royal Albert and the Globe are currently owned by Enterprise Inns.
Elsewhere, in Baneswell, at the reopened Engineers Arms, troubled pubco Admiral Taverns are advertising the freehold for £225,000.  Since this pub reopened late last year there have been two changes of licensee. My last visit there was disappointing to say the least as they no real ale on, the delivery from the Admiral Taverns supplier had failed to arrive.  The freehold of another Admiral Taverns pub, the Hornblower, is on the market for £175,000. This pub has suffered in recent years due to a series of drunken, slovenly licensees who have run this pub into the ground with their lack of hygiene, both personal and that of the pub. Once a regular in the Good Beer Guide, the 'Blower has only just reopened and I have heard some good reports about the place, even one regular telling me that the place is clean for the first time in years!
Elsewhere on Commercial Street the Talisman is also on the market, this time for £250,000 freehold. A pub that currently serves the local derelict community whilst they sell knocked-off electrical equipment that even the nearby Smack Generator refuses to touch. Still there is a Chaverspoons nearby that will no doubt cater for their needs.
Meanwhile on the High Street, the freehold of the Carpenters Arms is on the market for £250,000. Currently owned by Enterprise Inns and let to the JW Bassett Pub Company this is a rare local outlet for beers from Felinfoel Brewery. Before JW Bassett took the pub on it had been closed for a couple of years.
The Windsor Castle is also for sale, freehold £220,000, though I understand there are some structural problems at the pub which have put off potential owners.
Well there you have it, a round-up of pubs for sale in Newport, many of them having suffered from neglect from their owners for years, with the City Centre dying a commercial death to out-of-town shopping centres and Cardiff and Cwmbran shopping centres, the future does not look good for pubs in Newport.

So are all these up for sale Pubs still open? I thought the Royal Albert was closed as it was boarded up??

I was then told a group of chavs fighting outside Chaverspoons spelled over to the 'George' and a Chav got thrown threw the window of the Albert.. And they just couldn't afford new windows.. Th