Popping the cork this Christmas/New Year? Then why not splash out on a bottle-conditioned perry from award-winning cidermaker Denis Gwatkin instead of the usual supermarket plonk? Made exclusively from the Oldfield pear variety, this perry is originally fermented in a wooden barrel and then undergoes a secondary fermentation in the bottle, producing a naturally fizzy medium-dry perry, in the Méthode Champenoise style. This method of producing perry has been popular for many hundreds of years in the United Kingdom but reached a peak during the Napoleonic Wars when French imports were unavailable, since then there has been a decline in the production of British made bottle-fermented perry but there are a few enthusiasts out there who still make a few bottles.

The bottle labels feature the Gwatkin family Coat of Arms. 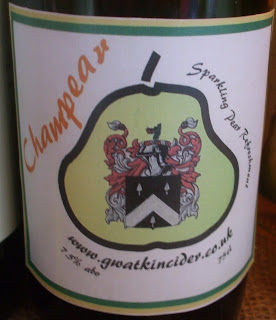 Bottles are priced at £10 each and are available from the farm in Abbeydore, Cardiff Christmas Market (High Street, by the Goat Major), or at the Federation of Poultry Clubs Show, this weekend - 18th-19th December in Stafford.