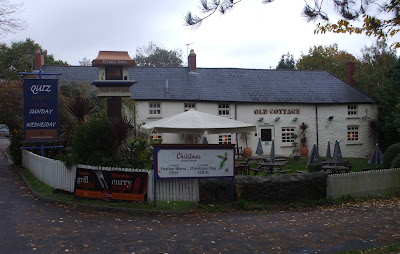 Old Cottage, Cherry Orchard Road, Lisvane, Cardiff, CF14 0UE
Open all day
Situated a short walk away from Lisvane and Thornhill railway station, the Old Cottage is almost hidden from the main road, set in its own grounds in a quiet hollow. There is an extensive car park at the rear and a bus stop, number 85, on the main road. The two-story building dates from the 1780s and rough-hewn whitewashed stone walls contrast with newer parts built of brick.  The long wooden bar runs almost the length of the pub with a split-level seating area towards one side, open all the way up to the roof with some decorative wooden panelling and beams and with a brick fireplace on the ground floor. The upper seating area has a wide-screen television, only used for major sporting events. The opposite end of the pub has a real fireplace with comfortable seating, providing a distinct drinking/dining area. At the rear of the bar is a modern extension with more seating. There is also an extensive outside area, with heated canopies for smokers. Despite the age of the Old Cottage it only became a pub around 1990 when it was converted from two cottages and was originally owned by Ansells Brewery of Birmingham, part of the Ind Coope empire. Today the pub is run by Ember Inns, part of the Mitchells and Butlers pub empire. Ember Inns have an active guest beer policy with 9 handpumps on the bar, although not all are used during quiet periods. Three real ales are permanently on the bar, Fuller's London Pride, Hancock's HB and Greene King Morland Old Speckled Hen and the guest beers can be from breweries around the United Kingdom. Recent guest beers were from Lees of Manchester and even a brew from Tetley Brewery in Leeds, a brewery that will soon close down. During November the Old Cottage is playing host to a month-long beer festival that will feature beers from BrewDog, St Austell and Thornbridge breweries as well as many others. Tasting notes for the beers are available in A5 full-colour booklets on the bar – a nice touch that adds some interesting information for the real ale drinker. It's no surprise that the pub has Cask Marque accreditation.
The Old Cottage serves food all day with special offers such as Grill Nights on Tuesdays and Curry Nights on Thursdays. This popular pub also runs quiz nights on Sundays and Wednesdays.
Google Map