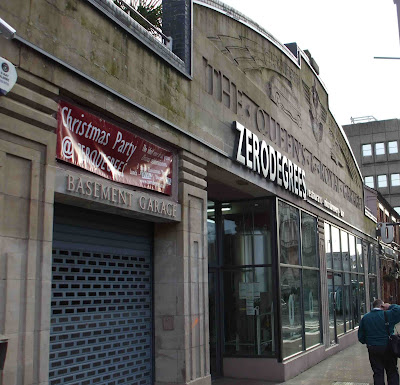 Zero Degrees, 27 Westgate Street, Cardiff, CF10 1DD
Situated opposite the Millenium Stadium, this art deco building was originally built as a garage, the motiff on the front of the building still has “Queens and Royal Garage” above the new “Zero Degrees” sign.  Below the signs, the large glass windows provide a view of the brewery, immaculate shinning stainless steel vessels which are illuminated during the night with colourful lights. Zero Degrees is a lot different from the usual brew pub, here the brewery is not tucked out the back of the pub but positioned strategically at the front for all to see. The entrance, on the left hand side of the building leads to thee bar area with the serving counter at the rear of the brewery. Again stainless steel dominates with a collection of tubes and pipes leading from the cellar tanks to the beer taps. The brewery brews a range of different beers including a Pilsner, a Wheat Beer, a Pale Ale, a Mango Beer and a Black Lager, in addition a monthly guest beer is also brewed. In October the monthly special was a 6.5% Oktoberfest Beer which had been maturing or lagering in the tanks since it was brewed in early August. Other seasonal beers have incuded an Apple Wheat Beer and an Asian Lager. In December the beer is Peach Vanilla. The resident brewer, Victoria Stippa is originally from Germany and previously worked for the Paulaner Brewery. There is an interview with her on Wales Online.
A nice touch is that a sample selection of all the regular beers can be ordered giving the customer the opportunity to try their range of beers without having to order halves or pints.
The interior of  Zero Degrees is cavernous and there is a choice of seating on the ground floor from tables and chairs to sofas and stools. The bar is circular in shape so that wherever you choose to sit the brewery is always at the focal point of the pub.
Also on the ground floor is the open-plan kitchen with it's pizza oven, which bears a similarity to part of the brewing plant. Directly opposite the kitchen are the cellar tanks for the beer. Food is available all day with pizzas being a speciality on the menu together with more unusual pub food such as mussels.
Upstairs there is more seating and at the front, above the brewery, a doorway leads to an outside terrace, an unique feature for a Cardiff City Centre pub. Customers do not have to worry about carrying their drinks upstairs as a dumb waiter is installed by the bar.
Zero Degrees features a regular price promotion with all the beers reduced to £2 a pint between 4-7pm. At night the bar becomes popular with sports fans as the widescreen televisions and projector are put into use.
View Larger Map
Zerodegrees
27 Westgate Street
Cardiff
CF10 1DD
029 2022 9494
Facebook Site here