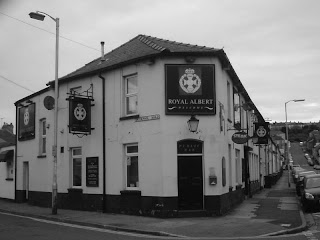 This time its the turn of the Royal Albert in the Maindee area of the City. The Royal Albert has only recently closed as the windows are not yet boarded up and the 'suspicious fire' that somehow befalls closed pubs has not yet occured. The writing has been on the wall for ages with regards to this closure - over Christmas the pub had very little stock in and hence very few customers. With a nearby JD Chaverspoons this pub has had difficulty competing for years, not helped by the pub company that own the Royal Albert. Not too sure who does own it, pubcos very rarely wish to have their names displayed on their pubs. The pub dates back to at least 1872 and was a Hancocks and later a Welsh Brewers pub. Not sure if this one will reopen, as Maindee pubs seem to be opening and closing on a regular basis. The nearby Globe has reopened and although the Carpenters (or Carps as the sign now says) is still closed there are signs of some work going on in there.

UPDATE:
Lease for Royal Albert is on the market for £25k.

Not a bad pub. Miss it. After a serious operation, I had my first post-hospital pint in there, so good memories.