Some former pubs in the Pill area of Newport. 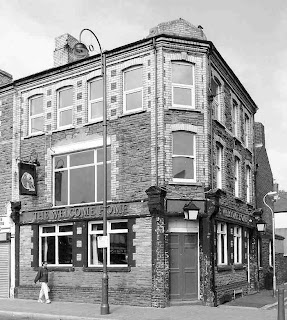 A bit of a blast from the past with this photo of the Welcome Home pub on Commercial Road, Pill, Newport. The photo was taken around 1996 just before the pub closed its doors for the last time and was converted to residential apartments. Situated in the docks area of the town, the Welcome Home became popular with the Afro-Caribbean community and their associated drug problems. In fact this area was known as “the Front Line” and for years was ignored by the police who had far more important duties to do in the Masonic Hall in Dock Street than stop Leroy and his mates selling and smoking their ganja. Just to the left of the photographer was the infamous Kwik Save car park that used to be at its busiest in the early hours of Saturday morning as cars queued up to buy drugs from the locals. There used to be a saying that “There is good craic in the Welcome Home and if you want other drugs the locals will supply”. In 1996 a customer of the pub was shot in the face with a shotgun following an argument outside the pub. The pub closed for good shortly afterwards.

The Welcome Home dates from 1848 and was owned by Lloyds and Yorath Brewery of Cambrian Road, Newport and later, Ansells Brewery, Birmingham. 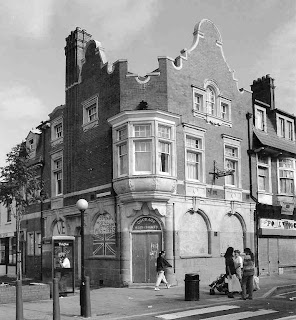 To the right of the photographer on the image of the Welcome Home and on the opposite corner was the Commercial pub. This had closed around 1993 and has been converted to residential. Dating from at least 1872, this former Phillips Brewery pub became a Courage Brewery pub after their purchase of Simonds Brewery, Simonds having purchased Philips Dock Road Brewery in 1949. 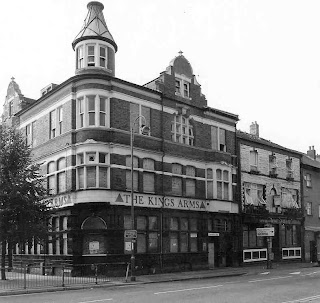 Further down Commercial Road towards the docks is the former Kings Arms, more fires have occurred since this photo was taken and today the building is nothing more than a burnt-out shell. First mentioned in 1830, though this building is a later 19th Century construction ,the pub was owned by Bass who acquired it through their purchase of Mitchells & Butlers Brewery, who in turn had purchased the nearby Thatcher's Brewery in Alma Street. The Kings Arms closed around 1993.

To the right of the Kings Arms is the Top of the Range Club.

There are a lot more former pubs in the Pill area of Newport, as nearly every street corner had a pub. Nowadays it is more difficult to find a pub that is open in the area. None of them sell real ale, however alternative drugs are widely available on the streets, which if this area were a bit more upmarket could be classified as a “slum”.

The Brew Wales Editor is considering updating the photographs of the area, those above were all taken on a Canon A1 with XP2 film nearly 15 years ago and only recently scanned in but Pill is not the place to be seen with a camera as the inhabitants of the Pill ghetto don't take kindly to strangers taking photos. No doubt in the belief that if their image is captured then they will be also be recaptured soon and end up back in Cardiff nick. Joking aside, no one has been shot or stabbed outside any of the pubs for years so the area is improving a bit; today East European deli's compete with the established typhus-hosting kebab shops and cat-currying takeaways although drug-dealing and prostitution are still rife in the area, the welcoming graffiti on buildings of “Pill Jihad” and “Sharia UK” should soon put pay to that.

Just corrected a mistake - it was typhoid in kebab shop not cholera.
@TelegraphNews Kebab shop shuts in search for source of typhoid http://bit.ly/8lYivf

Is there any Pubs left in Pill, as I not been down farther than Asda? I saw it advertised that something called Valerie's bar was opening down pill if it is even a pub...

Valeries Bar is by the Alma opposite Gillegans Island so not really Pill. Picton, Alexandra and Royal Oak still open. Waterloo now a very good restaurant.

As a pill resident it was not that bad ... Yes it had it's up's and downs but so did everywhere else... i bet your daughters visited the welcome home though lol as most of the newport women did!! look your wife/daughter in the eye and ask them ,you may well be shocked lol i might even know them . will comment again soon.

Well its been over 25 years dinc i hung around pill and things were just like the column says apart from the jehad and shia bit. Suppose trying to attract some humour????