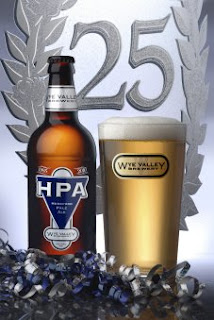 Although based over the border in Herefordshire, the real ales from Wye Valley Brewery are widely available throughout South Wales. Probably the best pint of HPA to be had is in the Angel Hotel in Abergavenny. Added to that HPA is the fastest selling beer at the Gwent CAMRA beer festival at Tredegar House Folk Festival, the brewery has good connections locally and well done to their first 25 years in the business.

2010 will be the 25th year of brewing for Stoke Lacy based Wye Valley Brewery, and they plan to celebrate by brewing even more excellent beer.

Wye Valley Brewery has come a long way since Peter Amor started brewing in 1985 in the old stable block at The Barrels, Hereford. Since then the brewery has moved to Stoke Lacy, increased its tied estate and invested in a state of the art bottling facility.

Wye Valley Brewery will start its 25th year on a high, with the launch of its popular cask beer HPA, in bottled format. Numerous other events are planned including the release of a special Limited Edition bottled beer in March and a race night at Hereford Racecourse in August where customers and staff will celebrate the brewery’s 25th anniversary in style with real music and real ale! Also, the brewery’s Herefordshire barley project will be realised and the first all Herefordshire beer will be produced, using local hops and local barley.

Fundraising throughout the year will benefit the brewery’s selected charity for 2010, Riding for the Disabled.

Said Peter Amor, Chairman and founder of Wye Valley Brewery, ‘It is obviously very gratifying to have come this far. It really is a collective achievement and our success is down to the dedication of the whole team at the brewery.’