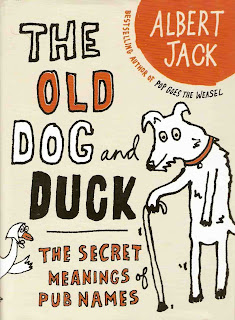 The Old Dog and Duck – The Secret Meanings of Pub Names, Albert Jack.

RRP £12.99, Half price at Waterstone's at the moment £6.49, Hardback. www.albertjack.com
A bit of post-Christmas shopping turned up this gem of a book at half price in my local Waterstone's. I did go looking for pub/beer related books before Christmas but apart from one book which had been published a year earlier there was hardly anything around. Luckily this one turned up in the post-Christmas sales.
A book on pub names is always a fascinating subject, with Delderfield in the 1960s having set the benchmark to be followed up by Dunkling and Wright producing the most inclusive study in the 1980s with their A-Z. Albert Jack has taken a different approach and has not only researched in depth every pub included in the book but gives alternative reasons for pub names. Previous books do tend to concentrate on one story/rumour for the origin of the pub name and often that is repeated in subsequent books, quite often the rumour is bolstered out of all proportion and that becomes the standard reason for the pub name. Jack's approach is to research deeply, often into heraldry and to put the alternative reasons for the pub names. One downside of this approach is that he often gets tied up in national politics as the reason for a pub name, e.g., the name White Hart is said to show allegiance to King Richard II, which may well be the case throughout most of England, however in South Wales the pub is more likely to have connections to the Morgan family who also used it on their coat of arms.
That aside this is a good little book that does not just concentrate on UK pubs, for instance Harry's Bar in Venice is mentioned, a pub identified as a national landmark by the Italian Ministry for Cultural Affairs. As well as the Irish pub Molly Malone's, described by Albert as “The Trollop with the Scallops” as he delves into the history and legends surrounding the person with that name.
This book is packed full of little pieces of information such as Mount Vernon, the estate of George Washington was named after British Admiral Vernon who gave his name to pubs and one of his victories was beating the Spanish in the War of Jenkins' Ear which was celebrated by naming a farm and road after a one of the battles – Portobello.
Altogether this is a well-researched book, on an interesting subject, not comprehensive on pub names but well-researched for each and every pub in this book. Roll on volume two sometime!