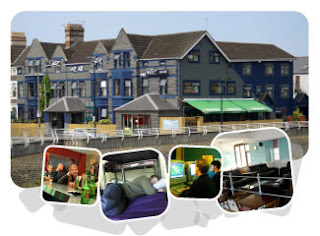 Situated on the West bank of the Taff, across from the Millenium Stadium, Tafarn @ NosDa is slowly establishing itself to be one of the better bars of Cardiff with ciders from Gwynt and beers from Artisan already available.

The festival on Saturday 30th January will feature live entertainment from 6pm, and beers and ciders from:

• Artisan Brewing Co. has created a range of distinctive, unique and downright bizarre beers all naturally brewed. Sourcing only the finest speciality ingredients from near and afar, Artisan Beers are wholesome and natural, with no filtration, pumps or pasteurisation. You won’t find Artisan beers on the shelves in a supermarket as they’re produced small and kept local.
• Gwynt y Ddraig, the award-winning Welsh Cider & Perry Company made their first few hundred gallons of cider on the home farm in Llantwit Fardre in the autumn of 2001. Since then they have increased production every year and broadened their selection of draught and oak matured bottled ciders.
• Untapped Brewery, run by two old friends, have started off with 2 beers - Sundown and Eclipse. But they’ve already got plans and recipes to make more fantastic beers as time and funds allow.
• Otley Brewery originated back in 2005. As a micro-brewery, Otley Brewery is dedicated to the craft of producing Welsh ale with a difference. They believe in using the highest quality ingredients with every effort made to source produce from the local area, including fresh Breconshire water and the finest malts and hops available.