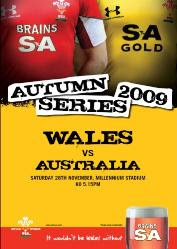 Brains, the official shirt sponsor of the Welsh Rugby Union, is offering you the chance to win a pair of tickets to see Wales take on Australia in the sell out final fixture of the Autumn Series.

Brains has been sponsoring the WRU since 2004. On the field the ‘Brains years’ have brought two Grand Slams in 2005 and 2008, four wins in six clashes with England and two victories and a draw over Australia.

To be in with a chance of seeing Wales attempt to notch up a second consecutive win over Australia, simply log onto the Brains website and answer the simple question.

If you're not lucky enough to win you can catch the action in your nearest Brains pubs.